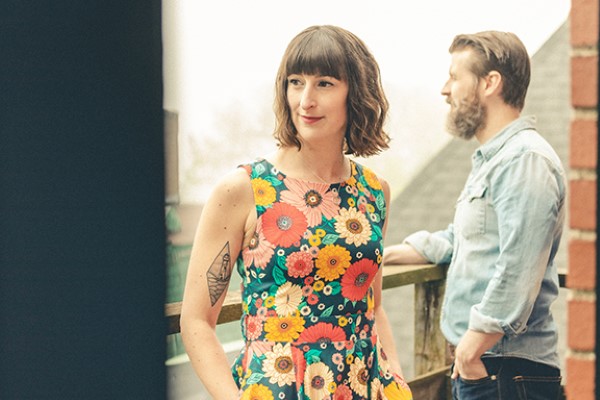 Saint John, NB-based folk and roots duo, Tomato/Tomato are back with a brand new single, “Chasing Rainbows” from their forthcoming album, It’ll Come Around, which is set for release on November 20, 2020.

The single was penned on a picture-perfect morning with their daughter Lucy. “It was a sunny Saturday, and we were reflecting on some vivid childhood memories,” John and Lisa McLaggan share of the song’s creation process.

“When we began writing for the album, we weren’t quite sure what direction we would be heading,” John continues. “We were, though, feeling strong pulls back to our roots.”

For John, that was how he grew up listening to mix tapes his father made for him, complete with generous helpings of The Beatles, The Beach Boys, Buddy Holly, and loads of other early rock n’ roll in between. For Lisa, who grew up in Chicago, it was a draw to early influences of Motown and the Blues.

“The direction for It’ll Come Around was solidified when a long-lost family heirloom returned to our lives,” Lisa adds. “In 1974, John’s Uncle David died tragically at the age of 19 in a gas station explosion. John never had the opportunity to meet his Uncle, but he knew they shared a love for the guitar.”

“I’d always wondered what happened to his guitar,” John says. “After we moved into our new home, the 40-year mystery was solved, however: as it turns out, our neighbour had the guitar and generously agreed to a trade!”

Check out the lyric video below, and find out more about Tomato/Tomato via our Five Questions With segment.

Hello! Lisa and John here from the duo, Tomato/Tomato. We met many years ago in music school and have been playing music together in some capacity ever since.

We have been described as folky, rootsy, alt-country, retro, rock, americana…the genre list goes on. No matter what “category” one puts us in, there will always be a lot of vocal harmony, catchy arrangements, good energy, and John’s inventive lyrics. This upcoming album, “It’ll Come Around” definitely has a lot of early rock n’ roll influence in it like The Beatles and Paul Simon. Since John does all of the songwriting, we decided to say the first words that came to our minds when thinking about how to describe his writing style. He said, “laborious” and I said “fun”. We both laughed. So there you have it. Balance!

Oddly enough, we are still extremely busy! We have a recording studio so John has been working away on a few different projects. He is focused on mastering as well as wearing his producer/engineer hat on a few projects. We are gearing up for some special (COVID friendly) Christmas shows here in New Brunswick, releasing our album later this month, and keeping up with our daughter who is a magical, nine-year-old unicorn.

We JUST released a brand new single called “Better at Leaving” from our upcoming album, “It’ll Come Around”. So we would love for you to start there! We also just released another brand new one called, “Chasing Rainbows” if you haven’t heard it yet. Sorry, I went for two.

We agreed on this one immediately: Bahamas.