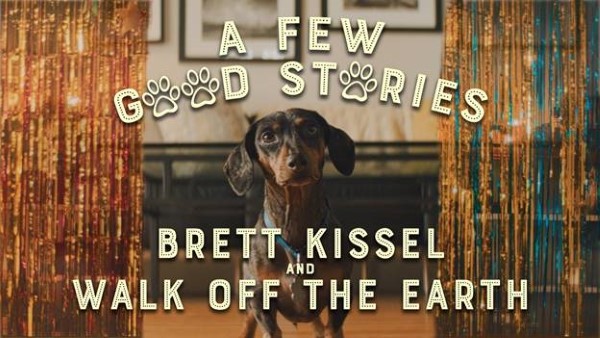 On November 6, Brett Kissel premiered his video for “A Few Good Stories.” As well as featuring Walk Off the Earth in the hit single, this band also stars in the video along with a cast of superstar dogs. There are special appearances by Connor McDavid and his pal Lenny (the Bernedoodle), Kaitlyn Bristowe’s, and Jason Tartick’s golden retrievers Ramen and Pinot.  But, the star of the video and making his debut is the Kissel family’s pet and fur baby, Charlie. This video also features Deuce vodka, a company in which Kissel is a co-owner.

“A Few Good Stories,” a fun video that is directed by Chris Di Staul, is one that will make you laugh the whole way through. Kissel and Walk Off the Earth had a “doggone good time” in their collaboration for this video. “WOTE.” SPOILER ALERT – you will see Charlie looking very innocent at the end … who didn’t do this a teenager who was about to be caught by their parents after having a party while they were out! Who among us hasn’t acted like the party diva played by Georgette (the poodle in pink)! And, who doesn’t love dogs singing karaoke.

Says Charlie of the making of this video and his music video debut,

As usual, Kissel is very grateful to his fans and the love they show him. He had this to say, via Facebook,

“Charlie and I want to thank you all for the LOVE you’ve shown us on our new music video “A Few Good Stories” starring @ohmycharlie and Walk Off The Earth.”

This is the kind of video we need to see right now.