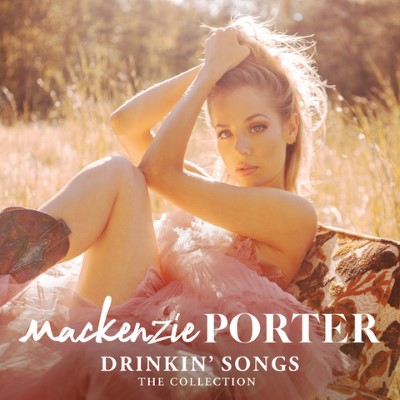 MacKenzie Porter has had a stellar year despite everything that’s been going on. On November 6, she released her new album Drinkin’ Songs: The Collection. It has seven tracks (all but one previously released as singles) and is sure to be a big hit. Porter also had three back-to-back #1 hits and with the release of “These Days (Remix),” she’s become the first crossover artist (country to pop) to earn a Top 10 beating out Shania Twain’s record set in 2003. All of this follows her success as an actor with her holding key roles on fan-favourites such as Hell on Wheels and Travelers. Plus … she eloped!

With the launch of MacKenzie Porter’s new album Drinkin’ Songs: The Collection we, at Canadian Beats, were given the opportunity to chat with Porter about this and all the great things that made 2020 a year she won’t soon forget. Check it out.

MacKenzie Porter is launching a new project and we, at Canadian Beats have been given the opportunity to chat with Porter about this and more. Check it out.

First of all, we want to congratulate you on your most recent project, the release of your album Drinkin’ Songs: The Collection, and all the successes you’ve had in 2020.

This project was held very close to the vest, no details were released ahead of time. What was the background for this decision?

This is a collection of all the songs I’ve released in the last two years and one new one — a thank you to my fans! I wanted all the songs to live in one spot as a full body of work instead of just singles.

Can you tell us a little about the album and how it came to be? If you had to describe the vibe of the music or the sound that you were aiming for, what would that be?

This album is the story of my past five years in Nashville. I released the first song (“About You”) in 2018, which went #1. Since then I’ve had two other #1 singles that I wanted to include as well. My newest single — “Drinkin’ Songs” — is on it and my favourite song I’ve ever written — “The One” — is on it as well. The collection, called Drinkin’ Songs, is a country lyric heavy album with pop production.

Do you have any habits or rituals when it comes time to writing or recording? Do you have to have notebook or computer or coffee or lemon water or anything like that? Take us into your process.

I usually wake up super early (6 a.m.), before my writing sessions. First, I make coffee and then listen to the new songs other artists have released that day. Then I workout to get my brain moving, then sit and start coming up with titles, hooks or lyric ideas. I’m the type of writer who has to start with lyrics first! I’ll bring those ideas into a co-write and we all go from there.

I need to be in a safe environment. If I don’t feel comfortable, my creativeness can shut off really easily.

Can you tell us some of the background stories that brought some of your songs to life?

Several breakups. The entire album is about heartbreak. I love a good, up-tempo sad song.

Is there any one song on Drinkin’ Songs: The Collection that you feel your fans can relate to the most?

I can’t wait for people to hear the new song. It’s called “The One” and I think it’s my favourite song on the record and the most relatable.

Now that this album is out for the world to hear, how does it feel for you? Has this album empowered you as a female country music artist?

Now that Drinkin’ Songs: The Collection is released, what does the future hold for you in regards to getting the world to hear and catch hold of and love what your music is all about?

I hope it holds touring very soon! I want to come play these songs live. I want to see people (hopefully!) singing them with me. That will always be the best way to connect your music to an audience.

What do the next six months look like for you, with no concerts, even no radio tours, to promote your new music?

Now, let’s get into some of your recent successes…

First … you and your connection with Shania Twain …

You recently broke Shania Twain’s record by having three back-back #1hits – “About You,” “These Days” and “Seeing Other People.” What was your first reaction upon hearing this news? I mean … Shania Twain … and you just surpassed her!

I can’t even believe this still. I’m the biggest freaking fan of Shania ever so even being in a sentence with her is shocking! So, so grateful.

Pop radio wasn’t something I was really aiming for. If I’m being honest it just kind of happened. Some pop stations started playing the country version of “These Days” so my label came to me with the idea of doing a remix. Never in my wildest dreams did I think it would go that far. Still can’t believe it!

What the reaction from your family, friends, and fans when they heard about these two amazing accomplishments?

Just so supportive! I have the best family, husband, and friends in the world.

You currently have three singles at radio — two in Canada and one in the US, all of which continue to climb the charts. Congratulations once again.

There has been a lot of buzz about “These days (Remix).”  Tell us a bit about what you are hearing about how this song is a must listen to tune.

I think it’s just a good vibe — one of those songs you turn on and it just feels good? It’s also very nostalgic which, personally, is my favourite type of song.

Your new single “Drinkin’ Songs” available via Big Loud Records was recently released everywhere.  It’s a heartbreak anthem that’s so upbeat. It tells the story of celebrating during post-break-up. How did this single come to be?

It was a song one of my friends wrote actually and when I heard it I just knew I wanted to record it.

You are the second most-streamed Canadian artist globally, following The Weeknd. That’s pretty amazing. You must be ecstatic about this success. How do you think social media has helped you even more than usual during these crazy times?

Social media is the only way right now I can connect with my fans. Normally I would get to see them out on tour so it’s literally everything right now and I love being able to connect with fans in this way.

You were nominated in three categories – Fans’ Choice, Female Artist and Songwriting for “These Days.” That’s very impressive. What was your reaction when you heard the news?

Soooo pumped and honoured. There are more amazing Canadian artists now than ever. So just super excited to be included.

Your performance from Nashville was pretty great, a truly memorable moment for you I’m sure.  What precautions did you have to take before walking onto the stage?

I was the only artist there at the time. They took our temperature, we wore masks and as soon as I was finished performing we were ushered out. I felt very safe and it was done very professionally.

On your wedding day …

You secretly married your now-husband Jake Etheridge at the end of July and People magazine had exclusive photography rights, First, huge congratulations and best wishes from all of us at Canadian Beats.

Yes, we are so, so happy to be married. We eloped in Nashville with only our immediate family there (12 people). But it wasn’t a full wedding. We are planning to do that next summer. With the real dress and real first dance.

What made you decide to elope in the middle of a pandemic with all the restrictions in place? You actually realize that your original plans are out the window but now you had the opportunity to have something totally different that is also so unique and even more personal. There is a grace about doing the way you did.

You actually realize that your original plans are out the window but now you have the opportunity to have something totally different that is also so unique and even more personal. There is a grace about doing the way you did.

I would highly recommend eloping like that. It was such an intimate day there was no stress and we really got to focus on what was important to us. Not gonna lie, I’m very excited to throw a big party when it’s safe to do so but this was so, so special to do first.

Tell us about the dress you wore and the first dress – your real wedding dress you are going to wear when you have your “big bash”? It must have been hard to not wear the first one.

For the elopement, it was much more casual. I wore a cocktail dress and borrowed my best friend’s veil. My real wedding dress I am freaking obsessed with. You will have to wait and see.

And, the cake? The sister created it for you. That must have made your special day even more so.

My sister is an incredible chef/baker! It was soo pretty and so yummy!

One question on the pandemic …

What have you been doing at home during this time? A time when you normally would be touring.

You have amazing fans. Let’s chat about some random things that will make your fans get to know you better.

What artists have the most influence over you?

That hard work always pays off in some sort of way. That I literally could NOT do it without my fans. They are the absolute only reason I get to do what I love.

What do you think your “biggest break” or your “greatest opportunity” has been so far in your music career?

Getting my record deal in Nashville! Having the team I have has changed my life and I am so thankful for them.

If you could choose just one artist to collaborate with, one who you haven’t worked with, who would that be?

That I love them so, so much! They make this all possible. And if they ever see me out please come say hi so I can thank them in person!

We at Canadianbeats.ca thank you, MacKenzie, for taking the time for this long interview. We are very grateful to you and we hope that this interview will help your fans get to know you a little more. We wish you continued success and we are very excited to see what the future holds for you!