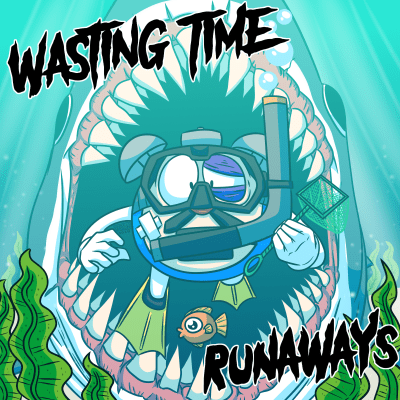 Toronto, ON-based pop-punk quartet, Wasting Time are back with a brand new video for their single, “Runaways”. The band has been active since 2017 with one full-length, several EPs, and singles under their belt, and a sophomore album due for release in 2021.

Check out the video for “Runaways”, which was directed by Michael Amaral, below, and find out more about Wasting Time via our Five Questions With segment.

We are called Wasting Time and are based in Toronto. We’re the hottest thing since short shorts, a riveting four-piece pop-punk band knocking on the front door, willing to kick the back door down if necessary, and waiting to bask in everyone’s “oohs” and “ahhs”!

The band features Vlad on guitar and lead vocals, Mike on bass, and our newest members,  Mark on lead guitar and Mikey on drums.

Our background is rooted in pop-punk, but our upcoming album features classical instruments, keyboards, and an overall expansion in our sonic palette.

As for our songwriting process, it starts with Vlad sitting in his B laboratory and writing in a sporadic frenzy. He’ll then proceed to annoy the rest of the band to learn these songs and pouts until they finally do.

We’ll have a few online streams in the near future. Dates to be determined. Keep up to speed on our social media accounts for upcoming details!

Our live show is a sexual trainwreck (just kidding!). It’s more like a car crash – horrific to look at, but hard to turn away from. We play with a lot of energy and our set is a show within a show. If we’re not making fun of the crowd, we’re making fun of each other. In between all of that, we’re playing kick-ass pop-punk tunes.

“Runaways”. Why, you ask??? It has a lot of dynamics, catchy melodies, cool harmonies, and plenty of octaves.