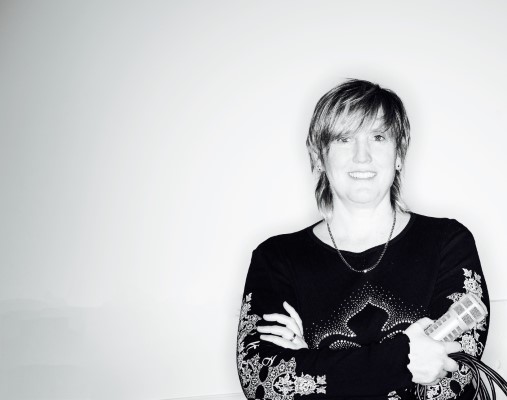 Vancouver, BC-based Julia Sound has released the brand new single, “Look to Tomorrow” from their upcoming EP, Times Like These.

Created by Lin Gardiner, Julia Sound is a BC music collective that is 100% female written, performed, and produced – with further diversity focusing on Bi-POC and/or LGBTQ2S+ artists.  For this debut single, Gardiner created a lighter sounding hip hop beat, which has a  melancholic undercurrent. Megasonic appears on the track, and the featured hook singer, Keely Halward, added her soulful folk voice for a memorable chorus.  For the EP, Gardiner collaborated with different singers and rappers for each song, creating a collection of evocative, ethereal, electronica-based, vocal-led music. Gardiner has always been drawn to and influenced by bands like Massive  Attack, Tricky and Leftfield, and has followed in their footsteps with this approach of different featured performers on each of the tracks.

Inspiration for the project’s name is from ‘Julia Sound’ – an unexplained sound discovered by scientists in the 90’s, most likely created by the shifting of an iceberg on the ocean floor. The  sample that exists of that sound is mysterious and dark

Check out “Look to Tomorrow” below and find out more about Julia Sound via our Five Questions With segment.

My name is Lin Gardiner and I’ve been writing and producing music for many artists for a long time now. I’ve also spent the last several years directing video game music, and am currently the Music Lead on ‘Age of Empires IV’. Julia Sound is a new project of mine, where I’m composing and producing the music and bringing in different singers or rappers, or a combo, on each of the tracks. My strength is in writing, arrangement, and production and there’s nothing I love more than collaborating with singers and lyricists for them to complete the piece. I’m really excited to be releasing some of this new content over the next few months.

I have pretty eclectic tastes and have worked with a lot of different genres over the years, but as a preference, I’ve always leaned towards electronica, hip hop, dance, dub as well as a healthy dose of pop from time to time. I usually start a track just noodling with different sound palettes and getting a mood and building up from there. I often get an idea for the song’s theme and possible collaborator and will come up with a title and then pitch it to the singer to see if it’s a fit. For all the Julia Sound songs I was so stoked at how easily everything came together. For ‘Look to Tomorrow’ I had worked with rapper Jo Megasonic on a couple of tracks and was hugely impressed with work – I knew she would be right for this beat. The hook singer Keely Halward is a very talented painter, and probably less known for her musical talents, but she had attended a songwriting workshop I put on at my studio and I loved the tone of her voice and had a good feeling she would complement Jo on this track. She took a rough of the song with some placeholder verses to a remote island and she managed to get cell reception to send me the rough, which she’d recorded at about 4 in the morning in this magical place in BC. We went back and forth on a couple of tweaks, and she came to record the hook at my studio, although I use that cell phone recording in the intro. Jo wrote the verses as a message to the children and young people who are going through these unsure times, with the intention of a hopeful look at the creativity and resilience that this pandemic has required of all of us.

I’ve done a lot of shows in the past with various bands, but as Julia Sound is a brand-new project born during the pandemic, we haven’t performed live yet. Despite the lack of live shows at the moment, we are talking about figuring something out in 2021, in terms of possible small outdoor socially distanced appearances but also looking into some virtual options. In general with live shows,  I’m happy to hang back and deal with the tracks and the keyboards and let the singers take center stage.

Oooh, that’s a tough question, as I love all these songs for different reasons, and think the different singers have brought something unique and special to each track. The first song I started working on in the collection, “Aja (So Beautiful)”, is a 6 ½ minute electronica-dub hybrid featuring 3 singers… I had sent the beat to Dolly de Guerre, an Irish singer now based in Vancouver (lead singer from Bae Baracus). I loved her rich tones, and the kind of punk gothic vibe she brings, mixed with her Celtic flavours. This was in around February, so the realities of the pandemic had not yet hit. Due to our schedules, she hadn’t played to me what she’d written so I had no idea what she would come up with. She attended the same workshop at my studio as Keely in early March and at the end of the workshop, we had about an hour before she had to leave for the ferry back to Vancouver. I got the track up, and she sang it in the room. I remember there was me, Jo Megasonic and another singer Anjali, all from the workshop too, still there and we were all blown away by the power and the beauty of Dolly’s part. I could tell Jo and Anjali were totally into the track too, and as the workshop had been focused on writing quickly to a brief, I turned to both Anjali and Jo and said “What have you got?”. They threw their parts down so fast (Anjali also had to get the same ferry!) and it was all just so perfect for the song. I’ve always been fascinated by how some Celtic and Indian music can really blend, crossover and compliment, and I feel that Dolly and Anjali’s parts really reflect that sonic blend in this song. Jo’s rap verse was the icing on the cake and the first of the 3 songs in this project that she featured on. As it’s such a long song, it likely won’t be a single, so you’ll have to wait for the EP release in early 2021 to hear it!

As well as Julia Sound, I’m in another project, electronic trio Bae Baracus, so I’d give them a plug and recommend at the moment! I’m also working on some songs with Kinnie Starr and she’s an artist who I rate very highly, she’s really innovative and thoughtful with her content. I think Vancouver’s Dear Rouge are doing really great things, and Vancouver’s Junk is one of my favourite rappers at the moment, he keeps getting better and better. As I also have a soft spot for pop, I think Alessia Cara, Jamie Fine and Elijah Woods all have buckets of talent. And surprisingly recently I’ve found myself being really impressed with a couple of Justin Bieber performances, which is a sentence I never thought I’d write but his SNL performance of ‘Holy’ with Chance the Rapper was on point. Honestly, there’s so much talent in or from Canada and I’m constantly blown away by Canadian artists both new and internationally renowned.