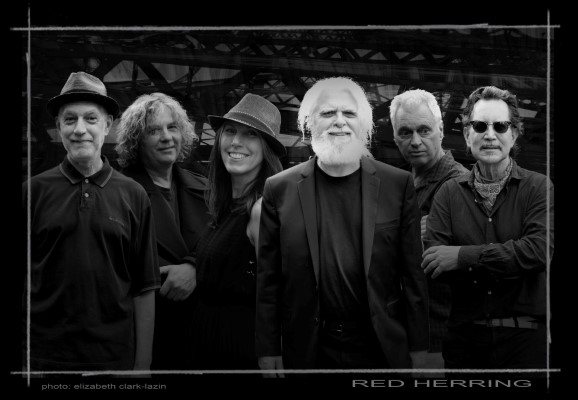 The six-song album features the lead single, “The Brain Song“, a quirky tune about brains, resentful about being jammed in the skull all day (“like slugs in Tupperware,” as Renz unforgettably phrases it), dependent on the senses for contact with the outside world. Longing for unmediated experience, they plunge down the body “like garbage down a chute” during sex, to commingle with other brains where the genitals of sexual partners meet.

The song – the subject of a playful rock video directed by Eddie Gross, using footage shot by Enrico’s son Jeff –  was probably informed by his philosophy studies at the time, but is really “just a humorous take” on questions of epistemology and identity, Renz explains. “Even if we were just brains in a jar, where is the actual ‘you’ in that, and how long can you keep slicing off little bits before there is no more you?”  It is one of the earliest Red Herring compositions, written “right around the time when I first met Stephen Nikleva,” circa 1980.

Renz was still figuring out how to compose back then, obsessively reworking riffs until he found what he wanted.

“Just learning that riff in itself takes a long time, right? You’re composing and learning it at the same time; and this was still at a time when I couldn’t read or write music, and had very little music theory, so it was just, ‘dat-dat-dah-dat, What’s the next note?’ By the time you figured it all out you’ve played it so many times that it’s finally in there, and when something makes it to that level, to put words to it is stronger.”

Check out the six-song album below, and find out more about the band via our Five Questions With segment.

Hi, I am Stephen Nikleva, the guitar player with the Vancouver band Red Herring.

This band actually started in the 80’s and our music is invariably called quirky and compared to bands like David Byrne’s ‘Talking Heads’.

How have you been keeping your creativity flowing throughout the pandemic?

Well, without the usual amount of gigs & rehearsals I have had a lot of time for more practicing, and writing of new material.

Well, I think I would suggest ‘The Brain Song’, the first single from our new EP, I really think it catches the edginess and quirkiness of the band.

Share this:
Related ItemsArt RockBC MusicCanadianfeaturedLootersNeonpremiereRed HerringVancouver BC
← Previous Story PREMIERE – Deep Rivers release video for “Nothing Ever Happens To Me”
Next Story → Five Questions With Miss Emily