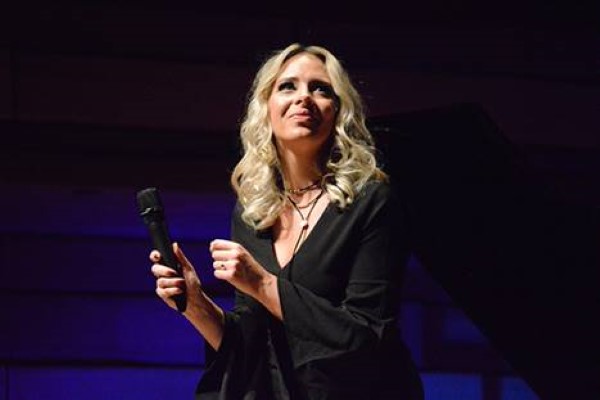 Multi-award winning soul and blues singer-songwriter Miss Emily has released a live version of her beloved 2014 single release, ”The Sellout”.

It’s not a one-off; the song is from the Kingston-based artist Emily Fennell’s first-ever live album release, Live at The Isabel, which was released on October 30th, 2020.

An enthralling compilation of songs, stories, and captivating moments, the live LP is a sonic snapshot spanning two+ years of record-setting sold-out performances at one of Ontario’s most prestigious venues, the Isabel Bader Centre for the Performing Arts.

As the first preview for what’s to come, “The Sellout” soars thanks to Miss Emily’s signature breathtaking vocals and Rob Baker and Gord Sinclair’s stellar accompaniments — guitar and bass, respectively.

From there, Live at The Isabel mines Miss Emily’s most noted archives, documenting two extraordinary periods and cross-sections in her award-winning career, including 2014’s Rise and 2017’s In Between.

The backing band for Live at The Isabel is the same crew of road-tested musicians who supported her throughout 2019’s Maple Blues Award-winning festival circuit; guest appearances by Gord Sinclair and Rob Baker of The Tragically Hip, and CCMA-nominated artists Kelly Prescott and Chad Murphy add what Fennell dubs as “musical muscle” on many of the tracks.

“I’ve worked with many of these musicians for more than a decade and, when I’m on stage with them, it’s like easing back into your favourite armchair…

“Except,” she adds,” that armchair is an incredible group of talented musicians.”

Miss Emily has won 2019’s Maple Blues Female Artist of the Year, New Artist of the Year, and the Sapphire Video Award. A frequent favourite on festival and venue stages nationwide, KISS’ Gene Simmons describes her pipes as “the best we have ever heard in an unsigned artist!”

Check out “The Sellout” below and find out more about Miss Emily via our Five Questions With segment.

Hi!!! My name is Emily.  I’m a full-time musician and I’m 107 years old.  Earlier this year I won a couple of Maple Blues Awards: Female Vocalist of the Year & New Artist of the Year (even though I’m 107).  I’m originally from Prince Edward County, Ontario (8th generation!), and moved to Kingston, Ontario, so I didn’t have to marry one of my many cousins.

I have sung a thousand Patsy Cline and CCR covers in every tiny rural bar you’ve never heard of and I’ve managed to play my original music at some cool, bigger events like Montreal Jazz Fest, Ottawa Blues Fest, and Big Music Fest in Bobcaygeon, opening for The Tragically Hip.

I’m a soul singer.  I love MANY genres of music but write primarily in what would be considered ‘soul-blues’.  I play piano and guitar but my music is best supported by organ and bass.  I love lower tones and a good groove and try to make that the basis for most of my music.

I’ve been doing this a LONG time.  Although this pandemic has thrown my industry some pretty major curveballs, I look at it as yet ONE MORE challenge in my career.  Nothing has ever felt easy and just when I started to feel like I was making headway with my music many different times, I’d often find the game had changed or momentum had been lost.

This year I’ve been participating in online performances when possible.  Early on in lockdown many of these sets were played at home, but now I’ve teamed up with festivals and theatres who’ve moved to an online performance set up.

I was also supposed to record a studio album in March, which never happened, so I got creative and put together a live album from a series of sold-out performances I did at The Isabel Bader Centre for the Performing Arts in Kingston, over the past two years.

The Sellout.  For sure.  Don’t need to think about that answer.  That song lyrically captures much of what I’ve encountered in my career, polishes it up, owns it, and belts it back out at the world for all to hear…

I love the writing and unique style of Kingston’s Julia Finnegan.  I’m a long time Sarah Harmer fan.  Begonia’s voice knocks my socks off and Terra Lightfoot slays all day.  Kelly Prescott, Samantha Martin, Tanika Charles, and Bywater Call are killing it.  I LOVE so much music, but I’m in awe of some of the female artists on the Canadian scene right now.