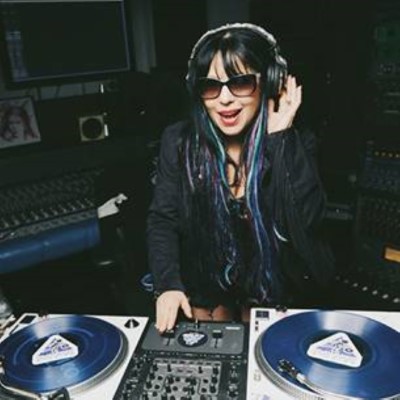 Canadian electronic artist, Melleefresh is back with a new album, Invincible.

The newly minted knock-out LP is teeming start to finish with alluring tracks that gracefully gravitate to that space between dance-pop and classic house — a space the acclaimed dance music diva has arguably owned since stepping onto the scene in the early ‘90s.

Speaking of the space between, Invincible is not without the very mischievous moments Melleefresh is known for, while a step back reveals powerful, inspiring themes of togetherness, unity, positivity, and a brighter future; it’s an album offering that’s found the prolific chanteuse at her most self-assured and hopeful.

The album’s first released fire track, “Let’s Do It Together” came together by reading the room; COVID-19 proved to be a perfect inspiration for Melleefresh and her production team.

“What a perfect song for these crazee lockdown days we’re all living through,” she marvels. “What better time for a ‘pandemic party.’”

The way it all came together was a peak-summer fever dream — a process Melleefresh wouldn’t have any other way.

“It was a super-hot and steamy summer night, and we’d been locked down since March,” she recalls of the process. “I was up late, as usual, and I got a text from Callum Magnum saying ‘I have some music,’ and when I asked who it was from he said, ‘it’s me.’

“I went right over at 3:00 am and, by the next morning, we had an album of eight tracks — lyrics, and everything. Boom, it was done!”

Check out “Let’s Do It Together” below, and find out more about Melleefresh via our Five Questions With segment.

I’m Melleefresh, the sensual chanteuse, prolific songwriter, and Play Records boss bitch! Bringing camp and kitsch to your headphones and the dancefloor!

I love dirty banging beats. I’ve always had a knack for a naughty hook but with the classic house sound I worked on with Callum Magnum for my new album Invincible, I was also super inspired to write some uplifting lyrics to get everyone pumped up and feeling hopeful! especially during these weird COVID times. I write in the middle of the night, halfway between sleep and dream state I have pen and paper by the bed to write stuff down in the middle of the night, that’s when I get my best ideas.

I reach out to other artists online that I’d like to work with to see if they’d like to collab Amazing how many peeps get back to me, artists are dying to work with other like-minded artists,  and I send a capella or stems and the magic begins I have some very exciting projects to tell you about in the upcoming months and for the new year!

I am constantly coming up with new melodies, lyrics, and video ideas in my head. I’ve been doing lots of photoshoots, and fast and dirty video shoots to green screen and iPhone.

I produced a Melleefresh radio show recently where I play all the latest Play Records releases called Melleefresh Radio on iTunes Podcast.

I am also preparing a live stream soon: It’ll be a variety show of sorts  DJ ‘n and chatting, but it has to be different there are so many live streams out there, so I’m testing things, making new costumes, figuring out the perfect set, before I go live. It has to be the way things are going moving forward, I doubt very much live performance will happen for quite a while so we have to be inventive and keep on being creative it’s important for our mental state of mind, or we’ll all get bat shit crazy.

My all-time fave of my Invincible album is “Let’s do it Together”, because of its positive message But every song on the album is a hit! It’s one of those albums where you just have to listen from start to finish! it makes you happy and you won’t be able to stop dancing!!!

Let’s do it together.
Love yer sister and yer brother
Let’s make things better
You know we can do it if we try

Lately, I have been obsessed with DJ genderfluid, a mysterious hard house and techno producer from Toronto producing super fast beats up to 150 BPM! They have remixed all of my singles from Invincible!

Plus, they’re working with the brilliant rapper Chippy Nonstop on some banging rave tracks like “Let’s Get Messy For The Drama” which just came out on Wet Trax! It is some of the most exciting music coming out of Toronto so you have to check it out!

Also, Kardano, an incredibly talented up and coming producer from the west coast who’s bringing some super funky house vibes to Play Records. Love what he’s doing.  Stay tuned for his debut album next year! “Kardano does Kanada ” it will be his House music production with a selection of super talented Canadian singers this will be a very eclectic collection.

One other person, I must mention that I was recently blown away by was the Canadian artist POWFU from Vancouver, who took BEABADOOBEE (UK) COFFEE FOR YOUR HEAD and did his own track called DEATH BED.