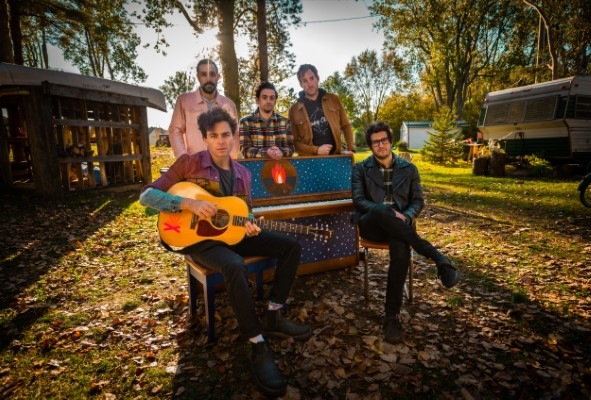 Hamilton-based band, Arkells, unveils a new song and video “A Little More.” They also add the track to Campfire Chords. Campfire Chords is a deluxe LP & play-at-home guitar chord book inspired by their most beloved hits. Written with a nod to the band’s piano player Anthony Carone, “A Little More” is an uplifting song about love and sacrifice that stems from when Carone’s musical father sold a bunch of his own gear in order to buy an upright piano for his young son to learn to play.

The official video that was once again self-shot by band frontman Max Kerman in one take on an iPhone. If this song was a movie, there’d be a disclaimer at the beginning that reads “The following is based on a true story.” Arkells latest A Little More comes as a welcomed *new* edition to their fan-favorite, Campfire Chords LP. The tune was written with a nod to their piano man Tony – an undisputed wizard on the keys. He’s been playing since he was a small child and they have adorable photos of a 6-year-old Tony to prove it. In Tony’s infancy, his musician-father sold a bunch of his own gear in order to buy an upright piano for his young son to learn to play. A fan-favorite, this story of love, dedication, and sacrifice was befitting of a song itself.

Hailed by The Globe and Mail as “the right kind of band for this decade,” Arkells are widely considered one of the most passionate, exuberant, and in-demand live bands working today. As radio mainstays, sport-sync shoe-ins, and curious students of culture, Arkells have remained ever-present – building awareness and personal community experiences around their live shows and new music at every turn.