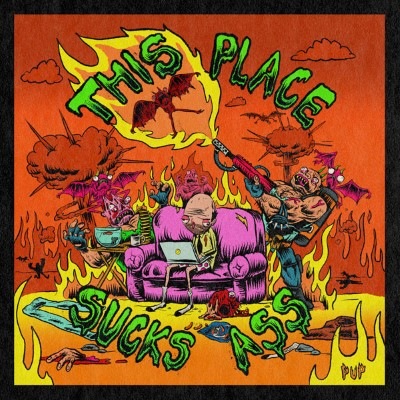 This Place Sucks Ass is the newest EP from Toronto based band, PUP.

This Place Sucks Ass is a riot in a can. Full of lyrics sung at a roar, wild drums, and loud aggressive guitars, you can almost hear the sweat it took the band to make this energetic record. There’s also a real feeling of affection in these songs, even if they are full of classic combative punk energy. This makes sense as according to their press, after recording their last album, PUP was left with a handful of songs that didn’t make the final tracklist because they were too “frenetic” and “unhinged.” Not wanting to let these stray red-headed stepchild tracks in with an album they didn’t belong on or abandon them forever, PUP put them into their own special EP. Of the delightful album title frontman Stefan Babcock comments:

“It was a thing we used to say as a joke a million times on tour. Literally any city, whether it was Lethbridge, Alberta, or New York City, we’d be like, ‘This place sucks ass.’ We have so much negativity, and sometimes it becomes so extreme and ridiculous that we start to find it funny. But at this moment in time, it feels so fucking real. Wherever you are, it sucks ass right now. So, wherever you live, whatever your circumstances, this is an EP about the place you’re from, and the place you’re at now…Everything sucks and that’s OK, because it sucks for everybody, and we can make it a little bit better by being together in the shittiness.”

Personally, I couldn’t agree more about the universality of this sentiment. The immediate catharsis of even just hearing such a jarring, but amusing title genuinely put a smile on my exhausted face. This smile spread even wider when I saw the amazing album art for this album. Drafted by Canadian artist Brandon Lepine, it perfectly depicts the vigor and sardonic humor that PUP pumps into each track on the EP.

The standout track for me on This Place Sucks Ass was Anaphylaxis. Capturing PUP’s playfulness, the in surprisingly upbeat track, the lyrics are about someone being taken to the hospital with serious symptoms; but the subject of the song is still wondering if it’s Anaphylaxis, hypochondria, or something else entirely. Who among us right now doesn’t know the anxiety of not being sure if you’re sick with something life-threatening, sick with something not life-threatening but has the same symptoms AS something life-threatening, or just straight up imagining things? As PUP might say, this kind of situation sucks ass, but there’s a catharsis throwing up your hands and singing along with the chorus.