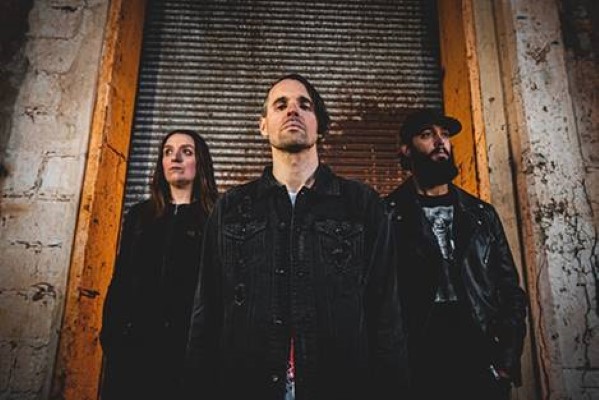 Ottawa, ON-based grunge alt-rockers NeoNera have unveiled the video for their single, “Saviour”.

The three-piece is made up of Dylan Gunnell, Evan McCluskey, and Stephanie Leger, and are on a dedicated mission to dismantle the world’s toxic cocktail of conceit, artificiality, perfection and celebrity worship through a heady combination of progressive percussion, driving bass, manic riffs and prescient lyrics.

“Saviour” is no exception as the band unveils a song about “men who believe women need to be saved both from society and from themselves,” Gunnell explains. “The superhero in the video is a man who wants to save, help and support women, but fails because he doesn’t understand them.

True to the band’s ethos to dig deep within both society’s ails and their own — a direction first heard on their eponymously titled 2017 debut EP, NeoNera — the song’s concept reveals something further…

For a time, “he” was Gunnell, the frontman shares.

“The song is deeply personal for me,” Gunnell expands. “It gets to the heart of who I was and who I am now as a person.

“There are parts of me, and I believe many men, whose actions are captured by the lyrics of the song and the characters within the animation — specifically the monster in the forest. These are things that are hard to admit because it means exploring who you are and asking, ‘am I good?’ ‘Am I a good man?’

“This song was written by a different person,” he marvels. “When I wrote the lyrics ten years ago, I thought I was one of the good ones. I used to believe women could be convinced to accept themselves outside the norms of society to be saved from society’s expectations of them.

“What it really amounted to, however, was trying to convince women to become who I wanted them to be. This is obviously wrong, and it’s something I’ve worked long and hard to change.

“That’s not to say there aren’t times women need support from men, but we should do this by voting to ensure their reproductive rights are upheld, and respecting a woman’s choice for how she wants to be rather than projecting our fantasies, wants and desires on them.

“So am I good now? The lyrics take on new meaning now as I understand exactly what I was. I mean, I knew what I was, but I wasn’t willing to accept it. This is how we grow; part of what I love so much about music and writing lyrics is the ability I have to get these feelings out there — to know where I was, and to remind myself of where I need to be.”

Check out the video for “Saviour” below and find out more about NeoNera via our Five Questions With segment.

We are NeoNera, a hard rock band from Ottawa, Ontario. For us, the message is as important as the music itself, and we work tremendously hard to ensure a balance between the two. We aren’t afraid to lose fans because of our message. We do not believe that social justice is a pejorative. Social justice is caring for others, wanting equality, recognizing privilege, and fighting to ensure fundamental human rights. We strive for authenticity in our music and our message, even if it means, as we have done previously, dropping off a bill to protect that message.

NeoNera is grunge with a pounding progressive rhythm that is funk, Latin, and Jazz-influenced. It is loud and heavy, and at times, unpredictable due to the incredible mix of influences of the band members. Our writing process is organic and ‘jam’ based.  It starts with a riff or a beat and builds from there. Dylan will often just improvise lyrics with a hook over a bass line or drumbeat. Other times, a guitar riff is the basis for the song. Everyone has an opportunity to add and no one person dictates the direction of a song. Steph and Evan fall easily into a groove, so it makes the writing process really fun, but it sometimes means we jam more than we should!

Practicing and improving our craft. During the height of the pandemic, we couldn’t practice together, but Dylan focused on improving his leads and really working on all facets of his voice. Steph covered songs, but she also turned her kitchen into a veritable café (and sometimes a bar!), trying all sorts of different recipes. Evan constantly wrote lyrics, which eventually became part of songs that were added to the band’s catalogue. We were always writing too, sharing riffs.

Steph adds: We did manage to have a few practices in between restrictions being put in again and the creative flow is there, having been built up for a few months of not playing together. I think each of us have a lot of fresh ideas aching to get out and when we do get back to practicing regularly we’ll put them all together, let the magic happen, and then fine-tune them into some really solid songs.

Saviour. It perfectly captures NeoNera’s sound and message. It is raw and powerful, revealing both the band’s dynamic groove-based hard rock but also the way the band members themselves are stripped down to their core as it tells the story of an individual who no longer exists, yet one who, at times, fights to exist. It is sincerity and a fearlessness to expose our faults in order to better ourselves and understand who we are, but also who we’ve been.

Dylan: Our Lady Peace. I’ve seen them five times now, and they just get better every time. From an intimate 800 person theatre in Nepean, Ontario where they played the “Clumsy” album front to back to Bluesfest before thousands, they always put on an incredible show with tremendous humble energy. They are the quintessential Canadian band, so thankful for what they have and sincere in everything they do. They are everything I strive to be as a musician.

Steph: I’m big on supporting the local live music scene (in normal times when shows are actually happening) so I’ll mention a few bands I’ve become a fan of that are all putting out consistently solid albums: Onionface (dirty rock and roll, Ottawa), After Funk (Toronto), The Souljazz Orchestra (World Afro Beat, Ottawa), our friends Taming Sari (rock, Ottawa). So great to see the passion and talent coming from these and so many other Canadian bands. I’ve also made a Spotify playlist called, Rage Local 2020 featuring some heavier bands from around here and am blown away by all the talent there is.

Evan: I can’t live without The Tragically Hip, they will forever be my all-time Favourite Canadian band. Every year Spotify Reminds me that they are my most listened to band. That being said I do have a lot Canadian bands that I consider my favourites and over the years haven’t stopped listening to. Bands like The Dears, Broken Social Scene, Silverstein, Kingdoms, Metz, White Lung, and Iduna!