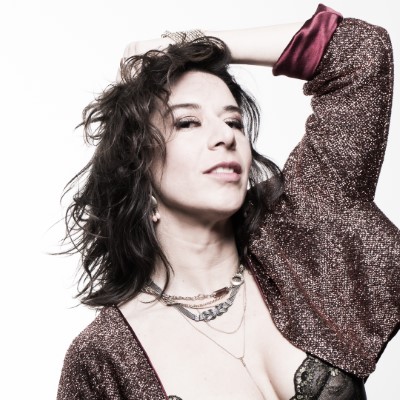 The album challenges our standard conception of traditional folk music (Quebec, Irish, Bulgarian, etc.) as a genre and heredity, instead favouring a more flexible definition. The album rather reflects the reality of the Canadian musical landscape, one which offers a diversity of traditional styles and influences. We’re verging on the creation of a “new folk”, inspired by a wave of renewal representing one’s unique identity à la Jeremy Dutcher or Tanya Tagaq. On this studio album recorded in full confinement, Briga offers collaborations with BLISK, Tamar Ilana and ALI X.

Check out the album below, and find out more about Briga via our Five Questions With segment.

Hi, my name is Briga, also known as Brigitte Dajczer. I’m a composer, producer, and violinist.

My music is a mash-up of eastern European turbo-folk, Maghreban grooves, and wailing violin & sweet vocals. I compose and write all my music, and am fortunate enough to be backed up by four amazing musicians. They are Alix Noël on keys & accordion, Tacfarinas Kichou on percussion, Marton Maderspach on drums, and Antoine Pelegrin on bass.  These guys bring in the sweet eclectic Montreal vibe and sound.

The new album, Territoire, was mostly written in 2019, but the pandemic hit just before we were going to start building/arranging the songs and to go in the studio to record. So I recorded and produced the record in my studio, getting the guys to track everything remotely and then building/arranging/assembling the tracks in my studio. We managed to get together twice in September to play for the first time together the tracks from the studio album. After those two rehearsals, we recorded a live performance at Hotel 2 Tango which aired on October 29th on YouTube. That’ll be our official release of Territoire… covid style.

But normally we get together and build the tunes before recording. This writing process was exceptional, like this year.

With the lockdown currently happening and no possibility of live shows yet, I’ve been focusing on getting stuff out thereby nurturing the online presence. My band and I managed to record the album launch of TERRITOIRE at the legendary Hotel2Tango Studios. You can watch it on YouTube.

I’ll also be showcased on the Yehudi Menuhin Foundation’s website, as part of a new initiative promoting violinists of diverse backgrounds and music styles. You can check that out as of December 1st, 2020 here. There’s also Radio Canada’S ICI Musique (the Francophone CBC) that is showcasing the new album with an online listening party here.  And last but not least, you can listen to & buy the new album here, and check it out on Spotify streaming here.

Tabou, from the new album Territoire

My current favorite Canadian artist is Jessie Reyez. She is so inspiring as a songwriter and vocalist!