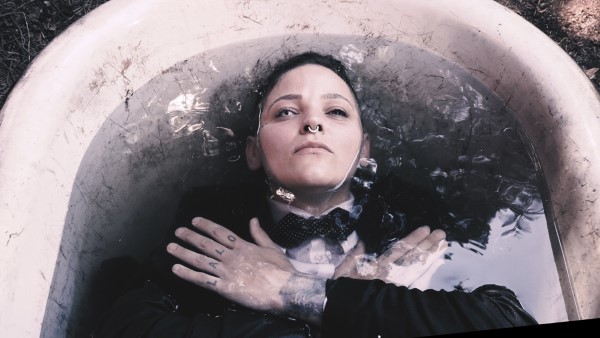 B.C. multi-instrumentalist and looping artist Uschi Tala is releasing a new video for “Warriors of Darkness, Wielders of Light,” an epic, dark fantasy and visual metaphor on the conflict between man and nature, marginalization and aggression.

A genre-bending fusion of minimal ambient soundscapes, witchy hip hop, and folk noire, the track appears on their forthcoming debut full-length album, Between the Veil, which is set for release on November 13.

“As a queer, genderfluid artist, I wanted to reflect on the ongoing struggle between not just nature and man, but also colonial violence towards marginalized folks,” said Uschi Tala. “Human existence persists in both the light and dark. We cannot have one without the other, and yet we must find peace and balance to coexist with one another.”

Filmed with permission on the traditional territory of the Sinixt First Nation in B.C.’s Slocan Valley, the video offers a glimpse of the area’s overgrown landscape, contrasting the natural world with remnants of concrete from an old highway and an abandoned building. Cloaked spirits and menacing creatures in suits symbolize the relationship between protection and exploitation of the Earth.

Check out the video for “Warriors of Darkness, Wielders of Light,” and find out more about Uschi Tala in our Five Questions segment.

My performance name is Uschi Tala. The name was inspired by my late great grandmother who ran away with the circus. Tala means a complicated rhythmic pattern; it’s a word taken from Sanskrit, a language belonging to a religious culture I was raised in as a child.

I am a self-taught, multi-instrumentalist, and poet. I play live electronic music with a loop station, building the song in front of your very eyes. I also write stories, music videos, scripts, practice martial arts, and sometimes ride and help train horses.

My first music video, “Don’t Heavy On,” was released in November of 2019. Now, I’m following that up with the video for “Warriors of Darkness, Wielders of Light.” The two videos share a narrative thread. The first is about luring your demons, healing trauma, and coming to terms with your truth in order to reframe your worldview, while the latter is about transforming that darkness into direct action. Both songs will appear on my new album, titled Between the Veil.

Between the Veil touches on all that goes unseen: the in-between realm, and the veils that separate reality from dreams, weaving ominous and tragically beautiful melodies that haunt and hold you close. It has been a very special process for me to articulate my dreams and experiences into something that I hope others can benefit from and be inspired by.

I have worked many long nights and early mornings to find my own unique sound, and even stopped listening to music for a while so I could accomplish this. I like to describe my overall sound as creepy ambient hip hop. I play a bow on my guitar that runs through an effects pedal, which gives me unlimited possibilities when creating soundscapes. I am able to create and edit my own settings on the pedal to fully customize my sound. There is an eerie whale-like ambiance to my loop building. My process of creating loops has become a staple of my work and sets me apart from other musicians.

Sometimes I draw inspiration from artists such as Chelsea Wolfe and Coco Rosie. Sometimes I have a specific story or topic I turn into a song. Sometimes ideas come to me from the ether and I just have to sit by patiently and let them be born as I eagerly decode the riddles as they come.

All shows are on hiatus as a result of the pandemic. I had a lot of shows and festivals booked for 2020 that had to be postponed to next year, including a 2021 Canadian Music Week showcase that I hope goes ahead as planned.

I would describe my live performances as enchanting and engaging. I like to create an environment that straddles the line between a waking and dream state, where myth and magic mingle, opening new realms of curiosity and calm all at once. It’s a paradox of sorts, but one that uplifts and leaves you questioning deeper truths inside yourself and the world, as if you walked into an alternate universe and were gifted with an experience that only you could have, a secret for only you to keep.

If I could only choose one, I would choose “Come Alive” off my upcoming album, Between the Veil. It’s an inspiring song with a message of finding strength from within. It was also the first song I ever wrote on my loop station and so it’s one of the dearest to my heart.

My favourite Canadian artists at this moment in time are Kimmortal out of Vancouver, and Dilly Dally from Toronto.

Kimmortal is one of my favourite performers and queer, non-binary hip hop artists. I saw them perform at ArtsWells Festival in B.C. and they blew me away. They continue to stand up for what they believe in and fight for justice through art.

Dilly Dally just makes me feel like I can do anything—and do it with a sassy smile on my face!