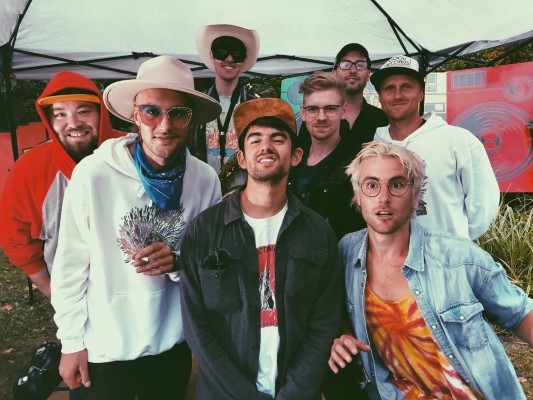 Downtown Mischief has teamed up with us at Canadian Beats to unveil their 2nd single, “Fall Into The Sky (Byee)” from their new album, Galactic Mantis, which is set for release on November 13, 2020.

“‘Fall into the Sky (Byee)’ was written in the studio,” says Poppa Phat Smile. “Old King Sundry laid down that bouncing beat with those weird magical woodblock sounds and we all freaked. We were just dancing around the studio feeling 10 feet tall because before we added the e-piano, the beat sounded so raw and confident. Then Wishbone Jenkins laid down the e-piano through a Red Panda Tensor to give it that glitchy sound. The keys really changed the feeling. At first we thought it may be too “happy”, but then we just gave in to the joy and started to float with the music.”

Check out the video for “Fall Into The Sky (Byee)” below and find out more about the band via our Five Questions With segment.

Downtown Mischief is a funky group of shenanigan causing ragamuffins who feel most at home outside singing to the stars. On and off stage Poppa Phat Smile and Wishbone Jenkins lead this menagerie of musical characters on a psychedelic escapade of joy and melodious wonder.

Although there is a rotating cast, the core members these days are Poppa Phat Smile, Wishbone Jenkins, Mikey Viperteeth, The Lone Ranger, Crispy Bananas, Staves the Tiger, and Elegant Mackenzie.

Our songs often start while on island adventures, singing while running through the old growth cedars of British Columbia, often on the way to surf breaks. On the flip side of that, our other most productive times happen late at night in basements and studios. We write with everything from ukuleles and sticks, to expensive guitar rigs in gear laden studios. The one criteria for all our tunes is that they gotta be funky feels with, hopefully, some comedy.

Typically our shows can get pretty wild and disorderly. Due to the current global situation however, we have cancelled all of our shows this fall and winter. Although some of us still are playing some solo shows, Downtown Mischief is not expected to be playing any shows again until the spring.

“Fall Into The Sky” is certainly up there, and “Dragon Fly Unicorn” is Mikey Viperteeth’s favourite as it has some super fun vibes!

Some of our favourite bands over here on the west coast are Hey Ocean, Jesse Roper, Ollie Happyness, and Current Swell (big emphasis on their old stuff, new stuff good too though).

Some east coast favourites are Fleece and Alessia Cara.

Our uncontentious favourites are Drake (don’t we all love him and his team?), Neil Young, Justin Bieber and Rush.