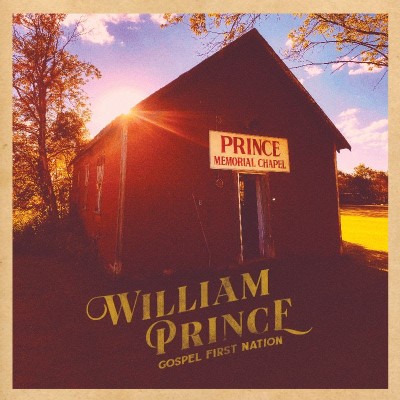 “Gospel is by definition ‘the good news,’” says Prince about his new album. “Everything considered, all that feels appropriate right now are the songs my family used to sing during wakes and funerals. Songs for families in need of comfort. These songs were capable of lifting spirits in the darkest of times. I witnessed it on many occasions. They provided hope and relief. A subject I addressed earlier this year. Maybe that message needs continuing throughout this time. This next story has been a hundred years in the making.”

Gospel First Nation is the follow-up to Prince’s last release Reliever which was released earlier this year. On Gospel First Nation, Prince tells us this story through the music of his childhood, songs of faith, struggle, and grace. These are songs he learned and sang with his father in the chapel named for his great grandfathers, all preachers.

“This album is an amalgamation of two realms. I am as much the grandson of Chief Peguis, the founder of Peguis First Nation, as I am Edward Prince Sr., one of the founding Christian pastors of that same community. I have tried reflecting on what Chief Peguis must have felt when the time came to embrace Christianity for the betterment of his community. When he became known as William King, whose sons then became Princes. The rest is the history I’m trying to understand.” Prince explains.

Prince’s JUNO Award-winning debut Earthly Days, released in 2015 and subsequently reissued by Glassnote Records and Six Shooter Records (Canada), introduced the songwriter’s poignant philosophy and rich baritone to the world. The follow-up album Reliever saw Prince continue on his strong musical path and bring his talents into the form of an album once again. Prince’s trajectory from Peguis First Nation in Manitoba, Canada, to opening for Neil Young, has seen the relative newcomer find esteem and career-changing opportunity wherever he performs.