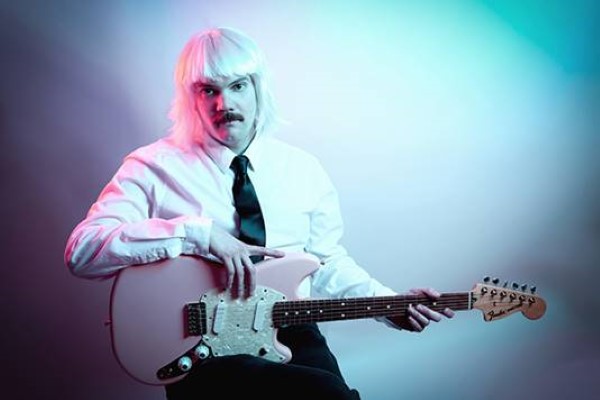 “There are albums in the annals of music history that are tied to and influenced by certain geographical locations,” Calgary, Alberta-based multi-instrumentalist (and man behind Deep Covers) Daniel Wilson says. “This is one of those albums.

In September 2019, shortly after experiencing the beautiful and foreboding volcanic landscapes of Iceland, I returned home and began writing Dark World,” he continues, explaining the backstory behind the sophomore release. “The imagery of geological contrasts and alien terrain translated directly into my frothing organic analogue synthesizers.”

There was more to the experience of both the trip and creative output that resulted from it, however. From its first opening, Dark World dives deep into themes of sustainability while travelling expansive sonic landscapes brought forth by Deep Covers’ icy guitars and mechanical percussion.

“I experienced the effects of global warming in real time while I was there,” Wilson recalls. “I watched pieces of ice fall off a glacier and float out into the sea. I thought it to be a good metaphor for a life lived unsustainably, both in the physical and mental realms.”

Check out “Repeater” below and find out more about Deep Covers via our Five Questions With segment.

My name is Daniel Wilson and I make weirdo synth-pop under the moniker “Deep Covers”. I’m currently based out of Calgary AB. I’m also a drummer, which is my first instrument and I play for the band Nite Twin. I played for the now-defunct Northwest Passage, Geist, The Magnetic North, and Beija Flor.

I would describe my music as synth-pop but with a darker undercurrent. I find myself pulling inspiration from post-punk, art-rock, and older industrial music more and more. I like pop music that feels a bit more dangerous but still has the hooks that keep you coming back.

I use the studio itself as a writing tool, which makes sense when you’re doing electronic music. I generally start with the music first and the lyrics come later. I mostly write lyrics in a stream of consciousness format and then change them to fit any meaning that arises. I record and mix all of my own work before sending off to a mastering engineer who finalizes the whole process. I was out of work for a few months due to the pandemic, which gave me the time to finish my sophomore album Dark World.

I usually perform as a solo act but I find that using synths, drum machines, and guitar allows me to bring a large and full sound to the stage. I try to make it engaging as if there is a whole band on stage. I don’t have any venue shows booked at the moment due to the pandemic but I’m currently preparing for live streaming performances on Twitch. I’ve been getting into filmmaking and cinematography lately. I plan to incorporate the visuals I create into the live streams to enhance the music and create a more interesting experience while folks watch on their screens. It will be on my new Twitch channel under danielwmusic and I’ll be posting streaming times on social media.

I would suggest Repeater, the latest single from the new album Dark World. It’s a dark, danceable, and three-dimensional sounding track. I just released a hypnotic video for it on YouTube which is worth checking out.

Suuns, Tim Hecker, Sinoia Caves and Operators are all awesome. I love Astral Swans, which I recently had the pleasure of playing drums for at a benefit show right before the pandemic hit.

I definitely have to mention Gowan too. I think the song “A Criminal Mind” is criminally underrated by my generation.