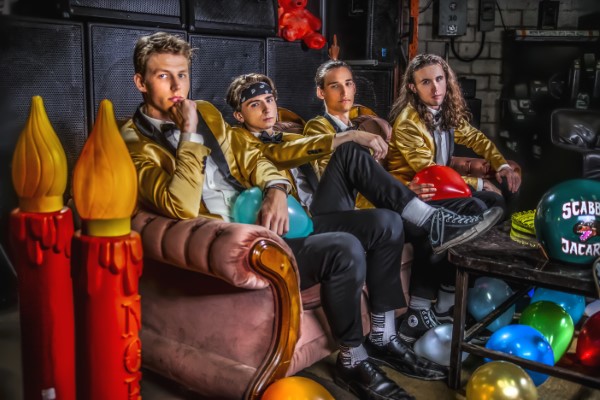 The band, which was formed in 2018 by high school friends, Matty Mclaren (vocals), Avery John Shoesmith (bass), and brothers Mack (guitar), and Sam Riddell (drums), have been said to have an energetic live performance, which drew attention from a top-tier independent label, Appreciated Music (a division of Appreciated Media) in 2020.

“Soda Pop Rock” delivers the youthful exuberance and garage rock(ish) sound that the carefree, guitar-loving foursome has become known for.

The band has said of their music,

“We want to make fun music. We don’t take ourselves too seriously and we don’t want our fans to, either.”

Drawing inspiration from every day, youthful antics, and experiences, the band works collectively on everything they do, and “Soda Pop Rock” was no exception.

“The song was inspired by a party where someone fell off the roof. Sam had this riff one day and Matty just started to write lyrics over it that were inspired by this party. The song’s about having way too much fun and just not caring.”

Check out “Soda Pop Rock” below and find out more about Black Pontiac via our Five Questions With segment.

Care to introduce yourselves?

We are Black Pontiac, a Vancouver born and bred band of hooligans making guitar-based music in 2020 (crazy I know). We’ve been together playing shows in Vancouver’s underground music scene for about three years now and in that time have begun to hone our garage rock(ish) sound as well as our insane live shows.

Having released our debut EP “Ponyboy” out into the world earlier this year (pre-covid but post-Australian wildfires) we’ve released a brand-spankin’ new single on October 26th with a full album currently in the works.

The four of us collectively draw from a wide range of influences that include straight-up rock, Motown funk, and soul, guitar infused hip hop, and rap as well as a sprinkle of some Santana-esque Latin. Ponyboy is a little all over the place in that regard as there are a plethora of styles that can be identified as we inch closer and closer to finding that thing that’s gonna make Black Pontiac, Black Pontiac so to speak.

The writing began as a collaborative effort between myself (Matty) and Mack, as he would come up with all kinds of cool riffs and chord progressions and I, would come up with the words and the melodies. Inevitably we began to incorporate Mack’s brother Sam (on drums) and our main man Avery (on bass) into the fold and so now the songwriting consists of the band jamming while I sit in the corner and write words as fast as I can.

Lyrically we’re usually tryna make fun of something and/or someone. So many songwriters out there nowadays take themselves waaaaaay too seriously.

COVID makes that a little bit of a difficult question. That being said, we’re currently in the middle of trying to put together a Livestream show with some other bands we’ve known for some time this Fall. In the meantime, be sure to follow us on Facebook and Instagram @blackpontiacmusic for more updates on that because it’s a little up in the air right now.

Our live shows (especially the all-ages ones) get rowdy (and I mean ROWDY rowdy). We recently brought up our record for most mosh pit related concussions in one show to 4 and a half at our EP release show. We write songs with the intention of playing them with a high level of energy and ultimately, we’re all just tryna have fun with it.

I would say Tequila Cream, I think it best represents the direction we’re currently taking sonically. That being said, Kate Rambo does kinda bang.

Between the four of us, it’s gotta be (in no particular order) Peach Pit, the Beaches, Said The Whale, and the quintessential Canadian band, the Tragically Hip.

I think it’s also worth mentioning Vancouver in particular has a crazy amount of underrated talent in all kinds of genres. Bands like Dacey, Necking, Sleepy Gonzales, Schwey, and Harlequin Gold are all so stylistically diverse and deserving of way more attention.