Five Questions With Revive The Rose 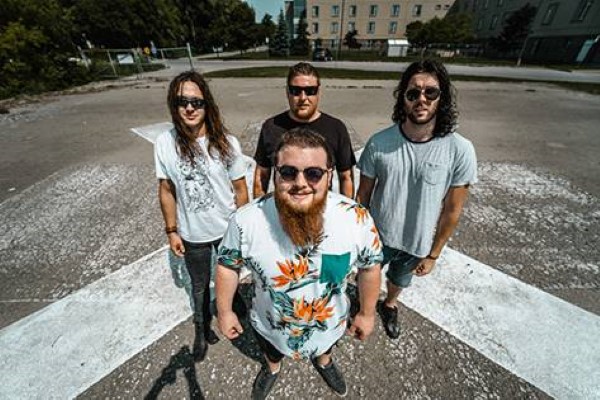 Welland, ON-based rockers Revive The Rose are back with a video for their widely lauded tribute to hockey, “Bar Down”, from their 2019 self-titled debut LP.

The song originally started as a theme song for a local OHL team and eventually, explains Colonico, was passed onto the NHL.

“Toronto Maple Leafs DJ Cale Granton entered the track into heavy rotation during home games,” Colonico says. “From there, it became a 2019-2020 official warm-up song for the team. Then one thing led to another and, after informing EA Sports about this, we’re now in a video game. “Bar Down” will be featured in the EA Sports NHL 21 video game as a warmup song.

“And making a beer for the song.”

Revive The Rose will release their official beer, “Bar Down Lager”, on Friday October 16th at Taps Brewhouse in Niagara Falls. The beer will be available for purchase online as well as several Niagara area bars.

“Hockey is a huge part of the atmosphere growing up in the Niagara region,” Colonico offers. “There’s a thick hockey history here, and there’s been a lot of OHL to NHL success stories from the Welland area — Dan Girardi, Paul Bissonnette, Cal Clutterbuck…

“We love the atmosphere this song has created, bringing so many friends and family together and crankin’ it up at the cottage,” Colonico continues. “It’s kind of our way of praising our small-town lifestyle… We always attend our pal’s hockey games and they always attend our shows; it’s just our way of life.”

“We really loved the term ‘Bar Down’ because our hockey pals just have the most insane lingo,” Colonico adds. “Rock and roll has always complemented the sport well. That, and beer.

“So now we’re known as the band from Niagara with the hockey song.”

The video upped the band’s ice cred even more thanks to some insider access to the IceDogs and their arena.

“My cousin Mike Krasnay worked for a film production company that shot the IceDogs games,” Colonico says. “He had access to the arena and the team’s management were all-in for the idea; they even showed the video at every hometown game!”

Check out the video below and find out more about Revive The Rose via our Five Questions With segment.

We are Revive the Rose, the 4 most idiot rock n rollers from the Welland, ON!

We are pretty damn diverse. Whatever sounds good in a big ol’ sandwich of rock and roll. We like to keep our writing simple, honest, and straightforward but still speak volumes. Our biggest style influences include punk, grunge, and straight-up rock and roll.

At the beginning of the pandemic we started a podcast-style, Instagram live show called “Sunday Streams with Andy C”. Each episode featured a wide variety of guests from Jon Harvey of Monster Truck, to Ed The Sock, and Wheatus. It was a great way to stay connected, it helped us network and meet cool people. As a band, we are also constantly writing and demoing to keep those creative juices flowing. And now we’re in a video game with our song ‘Bar Down’! Bar Down will be featured as a warmup track in the EA Sports NHL 21 game. To celebrate that, we made a beer called ‘Bar Down Lager’ made at Taps Brewhouse here in Niagara Falls, ON.

That is very tough as they are all equally loved – but they should totally give our song ‘Bad Blood’ a spin!