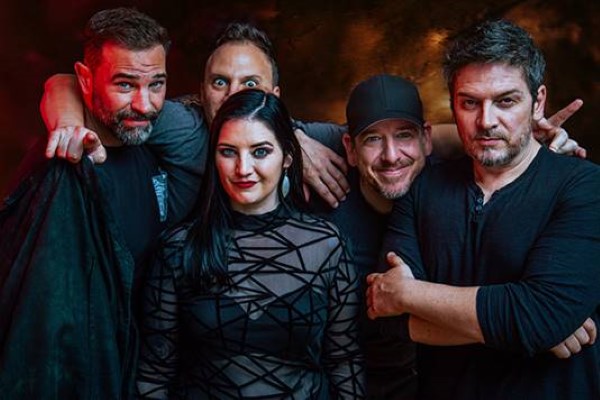 The song takes to task society’s outsized and accelerating privilege disparity through both the song’s lyrics and supplementary content, including an interview series wherein lead vocalist Rayna Elizabeth draws on her academic background to discuss the issues at hand with people who are directly involved with and affected by them.

“We wanted to write a song dedicated to the challenges faced by the working class in their struggle for fair treatment,” Elizabeth says. “‘Ordinary Lights’ highlights the precarious positions often faced by front-line workers — a fact that has been brought to the forefront and exacerbated by the pandemic.

“COVID-19 has been a difficult time for almost everyone, but it has been the workers in health care, retail, farming, delivery, waste disposal, public transportation, and other essential industries who have quite literally kept us alive through it all,” she continues. “These same people were already faced with low wages, long hours, job insecurity, and sometimes dangerous working conditions before the pandemic hit.

“Now, many of them are expected to risk viral exposure and, thus, their lives on a daily basis.”

Check out the lyric video below and find out more about the band via our Five Questions With segment.

My name is Andrew Lauzon – bassist and backing vocalist in Imperial Ashes. We are a five-piece hard/alternative rock band based in the Greater Toronto Area (GTA), with a socio-political focus to our lyrics and message.

Musically, we are firmly planted in the hard rock genre but within that, our songs range from being quite heavy (bordering on metal at times) to a more accessible, mainstream rock sound. However, melody and songwriting are central – even our heaviest stuff is rich in melody. Musicianship also plays a role in our sound – our top priority is always the song, but we do like to play. We listen to a lot of different stuff, but the newer progressive metal and djent bands like Periphery, TessaracT, Animals as Leaders, etc. have been particularly inspiring. We definitely don’t sound like those bands, but the influences inevitably bleed into what we’re doing.

Remote collaboration has always been central to our process, as the members of our band are spread out across southern Ontario. There’s about 150km between a couple of us, so it’s not really feasible to spend 3 nights a week together in a rehearsal space writing a record. We understood that going into this, so part of our mission statement from the beginning was to utilize the technology. We had already written six songs via file transfer collaboration before ever playing in a room together, and we’ve all played together in various bands previously, so we knew the chemistry was going to be there.

With the pandemic, we’ve just upped that game. Our debut single, Ordinary Lights was not only written via file transfer, but actually produced, recorded, and mixed using a combination of technologies such as Steinberg’s VST Connect, AudioMovers Listento, and Zoom. It was a real challenge to do a proper studio recording in that manner, but we managed to pull it off. The next frontier is online rehearsing, which is an inherently difficult problem because music is so time-dependent, and the smallest lag could make it impossible to play together. There’s an application currently in development called JackTrip, which looks very promising. They claim that it can facilitate online rehearsals for people who are within a 500-mile radius of each other. I believe it’s currently in beta testing, so I will be keeping a keen eye on that.

The absence of live shows has actually been a blessing for us in a way. I absolutely love playing live. It is by far, my favourite aspect of making music. However, as a brand new band trying to establish a fanbase, not having shows frees up a lot of time that we can spend on building a body of work and getting it heard. There are so many marketing and self-promotion tools at an independent artist’s disposal nowadays, but there is so much to learn, and it can all be very time-consuming, so not having gigs in the equation makes a big difference. Hopefully, by the time live shows are back, we will have built up a decent-sized following so that we can play our first show to a crowd that already knows our songs. That’s a pretty exciting idea to me, as the last time I was in a band that played original music, it typically took at least a couple of years of steady gigging to get to that point, and it can be kind of a bummer to play for half-empty rooms where nobody knows your songs.

Our debut single, Ordinary Lights is a good introduction to the band. It’s an energetic song based around a heavy guitar riff and melodic vocals. The lyrics deal with challenges faced by the working class in their ongoing struggle for fair treatment and highlights the precarious positions often faced by front-line workers, which have only been exacerbated by the pandemic. COVID-19 has been a difficult time for almost everyone, but it has been the workers in health care, retail, farming, delivery, waste disposal, public transportation, and other essential industries who have quite literally kept us alive throughout it all. These same people were already faced with low wages, long hours, job insecurity and sometimes dangerous working conditions before the pandemic hit, and now many of them are expected to risk viral exposure and thus their lives on a daily basis. The song is followed up with supporting content that takes a deeper dive into the topic. For example, Rayna (Imperial Ashes’ lead vocalist and lyricist) has done a couple of Zoom interviews – one with Roxie Danielson, a street nurse who speaks about her experiences working on the front lines during COVID-19, and Pam Frache from the $15 and Fairness campaign (www.15andfairness.org) – an advocacy organization dedicated to a $15 minimum wage, equal pay for equal work, and paid sick leave among other things. Each of our songs deals with a specific topic, so people can expect more content like this.

Our second single is called Xenophobic War and is coming out this Monday (Oct 26). It’s one of our heavier songs and deals with the tragedies and senseless human suffering caused by anti-immigration fuelled policies being implemented by governments both close to home around the world. I know you only asked for one song, but I couldn’t not plug the new one!

Iskwe is putting out some of the freshest, most interesting stuff I have heard in a long time. The way she seamlessly fuses so many different genres, including traditional Indigenous music is absolutely brilliant. The production on her latest album (acakosik) is incredible, and her visuals are just stunning. It’s the whole package.

Imperial Ashes may never have existed without Billy Talent, as Rayna and I met at one of their shows at The Horseshoe way back in the early 2000s. She was actually a part of their street team. Their new single, Reckless Paradise is killer. We’ve included it on our “Political and Protest Rock” Spotify playlist (which you can follow here.). They manage to continually put out great songs, while still retaining their signature sound and energy. Ian D’Sa is such an interesting and original guitar player. The energy of their sound was actually an inspiration for us when we first started to conceptualize this band.

July Talk is killing it. They are doing their own thing, taking risks, and not trying to conform to any formula, yet it’s resonating with so many people. Their sound is so unique, and I also love that they are vocal about socio-political issues both within their music, and in taking action. I saw them at the Rogers Centre last year, and Leah opened the set with a land/territory acknowledgement (The City of Toronto is on the traditional territory of many nations including the Mississaugas of the Credit, the Anishnabeg, the Chippewa, the Haudenosaunee and the Wendat peoples). I thought that was a classy thing to do, and hope that more artists follow suit.

And of course, Rush. It’s so cliché to name them when asked, but they really are one of the greatest bands of all-time and have been a huge inspiration for every member of Imperial Ashes. Their career was so prolific. When Neal Peart died, I personally rediscovered them in a big way. It was all I listened to for about the next 3-4 months. My father died four days before Neal did, and there was a beautiful, stripped-down version of “Time Stand Still” by a United States Army band going around. It really spoke to how I was feeling at the time and moved me in a way that I can’t begin to describe. I had it playing on a loop for about a week, and one night while walking home I just stopped in the middle of Spadina Road and started bawling my eyes out, thinking about my father, the gift of time, and the impermanence of life. People always talk about Rush’s musicianship, but it’s far too often overlooked that they were also great songwriters, and I think that’s ultimately what set them apart from other bands with formidable musicianship.