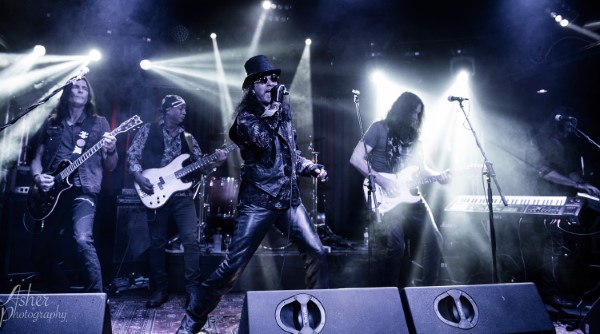 Vancouver, BC-based melodic prog-rock band, Mad Symphony is a collaboration of accomplished and professional Vancouver-based musicians who collectively have many years of experience writing, recording, and touring internationally with various acts.

Formed from the ashes of Seattle grunge-metal band Soulbender (which also featured Michael Wilton of Queensryche fame on guitar), lifelong friends and collaborators Dave Groves (guitar) and Wes Hallam (drums) joined up with multi-instrumentalist/producer/engineer Ted Tosoff (Blue Voodoo) in 2018 to begin writing for a new, as-yet-unnamed project.  Ted knew of powerhouse vocalist Kevin Wright (The Wilds, TNT), whose raunchy and melodic vocal stylings a-la Bon Scott and Robert Plant, fit the new songs perfectly; Kevin was quickly recruited into the fold. To round out the lineup, the formative members didn’t have to look far. Dave and Wes had both played with keyboardist Mike Russell (Sweeney Todd) and bassist Amrit Prasad (Assault), but not always in the same bands or at the same time.  With the addition of Mike on keys and Amrit on bass Mad Symphony immediately began recording their debut album and rehearsing tirelessly.

The band recently released their new single, “Sell Me Out”, which you can check out below, and be sure to find out more about Mad Symphony via our Five Questions With segment.

Mad Symphony is a six-piece melodic hard-rock band from Vancouver B.C.  Comprised of veteran and accomplished musicians, Mad Symphony seeks to move our audience with memorable and thought-provoking songs.

Mad Symphony’s’ music is deep and sometimes complex, with an unrelenting focus on groove and melody. Lyrical themes touch on the current state of world affairs and with a message of hope and resilience. Imagine a combination of Rush and Van Halen with the vocals of AC/DC and you might get close to describing Mad Symphony’s’ sound.

Due to the Covid pandemic, Mad Symphony does not currently have any upcoming shows. A Livestream will be performed to promote the release of our forthcoming release at a future date (to be determined). Fans can expect to hear a faithful reproduction of Mad Symphony’s’ studio recordings, performed with bombastic style and flamboyant orchestrations. The twin attack of guitars and keyboards, combined with heavy bass and driving rhythms, makes for a full and exciting new sound.

‘Sell Me Out’ by Mad Symphony is a song that showcases both the musicianship and song-writing prowess of Mad Symphony. With its upbeat driving guitar riffs, powerful vocals and hooks, and flashy drumming ‘Sell Me Out’ takes the listener on a musical journey through the best of classic and progressive rock.