Home / Promos / The Elwins release video for “Hung Up”

The Elwins release video for “Hung Up” 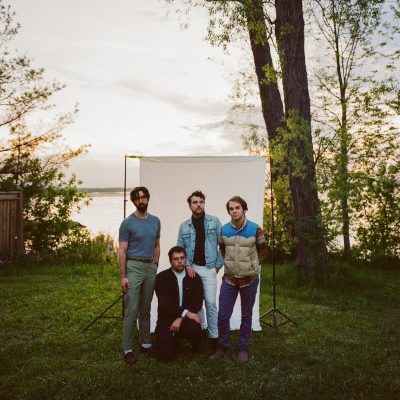 The Elwins are set to release their new LP, IV, tomorrow via Pink Eye Recordings in Canada and AntiFragile globally. The album was recorded in a handful of studios across Toronto and was produced by Feurd and mixed by JUNO award-winning Jay Dufour.

Today, they have shared a video for their newest single, “Hung Up”.

“When we started talking about video vibes we liked the idea of interpreting the song in a different way,” says Francesco Figliomeni. “We were chatting with our friend/collaborator Wyatt Clough (who has filmed all of the videos released so far and also took the album cover photo) and he mentioned he had been researching certain cult practices and we thought that would work really well for this song, being ‘hung up’ in something that may not be good for you – no disrespect to any of our fans who may be in cults, please still buy our album. Initially we thought we would hire an older actor to play a kind of the cult leader but with everything going on we decided that maybe we should just be the cult experimenting with our crystals and getting in touch with the astral plane/praying to catch a glimpse at the astral man. We shot the video in about a day and a half at this cute little cabin near Kingston. If you haven’t spent a day running around digging up crystals from the ground I would highly recommend it.”