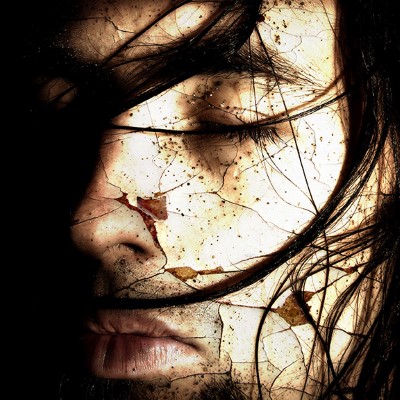 “Mubla Tubed is the result of a few years of experimentation and vibe chasing at home with no one else around — just me and my guitar and a vision of creating something energetic and interesting,” Atkinson shares of the project. “Most of the songs are straight ahead instrumental rock tracks, with the exception of ‘Moonlight’ and ‘Endless’ — the former being a nylon guitar Spanish-sounding composition, the latter being a vast, lush orchestral ambient piece, another genre of music I’ve been exploring lately.

“I love vast, epic ambient soundscapes and decided to add ‘Endless’ to the EP to tie together this album with another one I was concurrently working on at the time,” he continues, citing Aetherium Divine, his EP of fully ambient, lush orchestral soundscapes. “I also included an instrumental cover of a Soundgarden song called ‘Never the Machine Forever’ from their Down on the Upside album.

“It was an experiment with the lowest I’ve ever tuned any guitars; its performed utilizing a low A tuning, which is an additional whole step down from the low end you get with standard 7-string guitars or 5-string basses, so it’s pretty big and fat in the low end.”

Check out “#Grinding” below and find out more about Murray via our Five Questions With segment.

HELLO READERS!!! MY NAME IS MURRAY ATKINSON! I’M A ROCK GUITARIST AND I BREAK THINGS WITH LOUDNESS!!!

Tell us a bit about your music and writing style. How are you keeping creative without shows?

I’ve always found creativity in the weirdest craziest places. Usually, I get my song ideas when I am out walking the dog, or washing dishes or picking up groceries or something mundane like that. Just being out seeing, thinking, and doing things for me usually shakes loose those good little music ideas that pop down and you know right away you need to capture it. I am all about trying to capture that magic and the inspiration when it happens. I’ve got hordes of voice memos on my phone of ideas that pop into my head when I’m out doing those things. If you ever see me at a store somewhere huddled over my phone making weird noises into it, that’s probably exactly what I’m doing! I have a small set up at home where I record my music. It’s very small, humble, and limited, but it enables me to run in and lay something down when the idea is fresh before my brain has had too much time to spoil it. I’ve got enough tools at my disposal to basically flesh out the entire production for a song as I hear it and it truly is a labor of love capturing those fleeting ideas when they first bubble up. Because in my experience it’s always that initial impulse, that initial idea that pops out of nowhere, kind of flashes out of the ether, and lands in your lap that’s always the idea that stands the test of time and becomes something really worth listening to. Sometimes the song basically arrives almost all at once, and if I’m sitting in my studio when that happens I’ve been fortunate to be able to capture the ideas basically as they roll through my head. The single off Mubla Tubed EP #Grinding is actually a great example of capturing ideas and being able to record it as it happened almost in real-time. After I had laid out the entire four minutes of that song I listened back to it in its very rough primitive state and knew right away that the entire arc of the ideas as they came together worked fairly well, at least to my ears!

I’ve been keeping myself busy writing and recording a lot this summer, including tackling something I’ve never tried before, writing, and recording a 12 minute 6-movement instrumental suite! I may have bitten off more than I can chew with this one. Initially, when the world came to a screeching halt in the middle of March my writing pretty much dried up for about two weeks while I tried to make sense of everything that was happening. But then at the start of April, I had this huge outpouring of ideas, and with all gigs canceled and nothing else really happening yet I ended up writing what has now turned into an almost 13-minute instrumental suite of tunes which has been a unique challenge, to say the least! I have never really ventured much beyond the five or six-minute mark with many songs so creating something of that proportion at first seemed like a daunting task but again it was one of those things that kind of wrote itself as it went along. I didn’t intend it to end up being a 12-minute suite, but each different movement seemed to morph into the next part seamlessly and it all seemed to gel together, so it is what it is, this monstrous 12-minute blob of music!

Well, I’d have to suggest the first single from my EP that has the video, which is #Grinding. I think it’s a pretty good example of the kind of high energy guitar driven-stuff that I’ve been working on lately. I try not to just make it your typical guitar shredder guy soloing endlessly over chord changes, I tried to break up the form of the songs so there’s some soloing here and there and there’s a melodic theme that happens a few times, but then there are parts for development and variation. I tried to throw in some interesting production and for good measure even dropped in a bunch of random game-rage voice-overs from this dude on YouTube named Tyrannicon who makes gaming how-to videos and also has a bunch of funny game-rage cuts where he fails miserably at certain games and rages whilst doing so. I found his channel and got his permission to take random snippets and drop them into this tune so it definitely has an interesting mix of elements happening in this song.

I really dig what the Dirty Nil are doing. We saw them play in Toronto two years ago on a night off and man they totally blew us away. Such great stage presence, the energy and intensity of their tunes was off the hook. They remind me of a young Nirvana before they blew up. Great band!