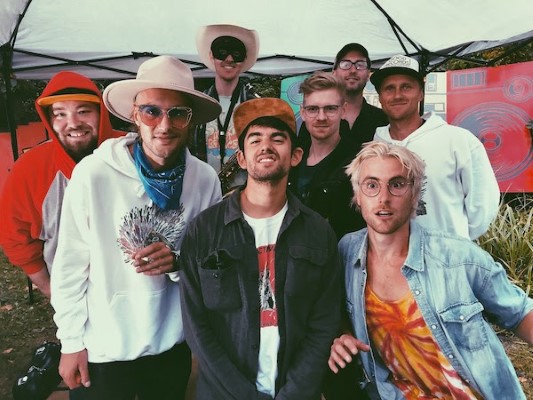 Part funk, part jazz, part rhymin’ – The Victoria-based Downtown Mischief are back with their sophomore release Galactic Mantis out on November 13th. The first single “Warm Bath” got its official release last week, after premiering on Aesthetic Magazine.

Downtown Mischief gave us a slice of summer with their new single and video. The collective’s signature hybrid of funk, jazz, and hip-hop comes through loud and clear on ‘Warm Bath’, and the song’s blissed-out sex-positive vibe definitely makes for a fun and interesting video.

“‘Warm Bath’ is really just a song for those who love to bathe, but it’s also for everyone who loves those people..so I guess it’s kinda for everyone. Who doesn’t love a sudsy wet time? Almost no one. So we decided to splash some tunes together!”

A wild West Coast lifestyle fuels Downtown Mischief’s inspiration, and each member has a musical story to tell. This unique menagerie of musicians met through the raw energy of Friday night jam parties in Victoria, BC. Incredible live performances and hot vibey studio sessions gave rise to Downtown Mischief: a cast of musical characters, each with their own alter ego, who form a driving, pulsing machine that explodes with life on stage. This emerging band will not only captivate you with their beats, smiles, and words, but they’ll get you moving and grooving!