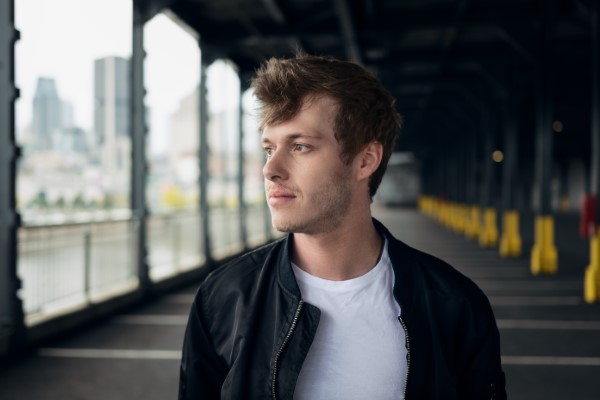 Montreal, QC-based producer, Farley released his new album Clocked on October 16, 2020. Clocked is like a palette of colours fusing several musical genres and where the complexity of live instrumentation melts perfectly into electronic production.

The album comes out of Farley’s desire to move beyond the bass in order to find a certain balance in his way of approaching music. Mostly recorded in his apartment here in Montreal, the album was mixed by Chris Vincent (Busty & The Bass) and mastered by Jon Kaspy (Jeremy Dutcher). Farley was also keen for a major part of Clocked to showcase the artists he collaborates with, including Wayne Tennant, HAWA, and his girlfriend Zoë.

Check out the album below and find out more about Farley via our Five Questions With segment.

Hi everyone, I create music under the monicker Farley. I am an active freelance bass player in the city of Montreal and was really inspired to produce music by myself. I saw multiple shows of Voyage Funktastique that completely changed my musical taste. It’s a collective of two DJ’s (Walla P & Dr. MaD) who spin vinyls and promote the New Funk/Boogie/Modern Funk era. They influenced me to recreate the vibe of a DJ night but with a live band set. My first album Clocked will be released on Friday October 16th – hoping you’ll like it!

My music is half oriented around vocals and features guests like Falcxne, Wayne Tennant, HAWA, Zoë and Nora Toutain. The other half is instrumental only. 50% of my music is made for dancing, the other half is more focused on textures and large reverberating soundscapes. A lot of my songs are ideas that didn’t become a full song in my other bands. I got some footage of shows with Jazzamboka where I improvise bass solo interludes. Watching it, I discovered some great ideas that I hadn’t thought of in the moment. Funny thing, I ended up sampling myself in my songs so I can use my ideas to their full potential. I record and play pretty much every instrument on the album except live drums and vocals. I like to work on many different songs at the same time, so they can grow together. I think that process helps to glue things together without having to come up with a concept.

I honestly don’t have any shows planned with my group for now because of the pandemic. The live set will be inspired by Pomo and Bonobo’s live sets. But, my live band, in which I will play bass and trigger the sequences, will replace the DJ set. I’m already working on a second album that will give me a stronger live set and a bigger repertoire.

I would deeply suggest Treat Yourself, featuring Falcxne. Perfect song for a Friday night!

Kaytranada, Pomo and Men I Trust!