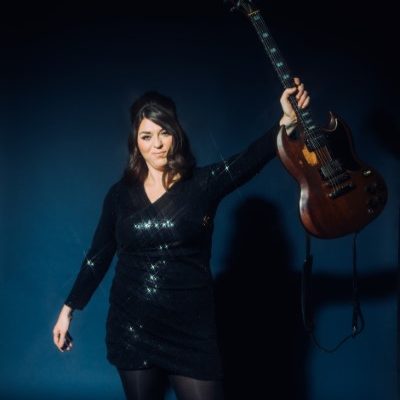 The single was recorded in Memphis, Tennessee at legendary Royal Studios, and sees Lightfoot supported by drummer Steve Potts, bassist Eli Abrams, and keyboardist Lester Snell — and was produced by Jay Newland and engineered by Lawrence “Boo” Mitchell.

The video for the song was directed by Mat Dunlap, videographer and graphic designer for The Sheepdogs, Andy Shauf, and Rose Cousins. For the freewheeling video, Dunlap transplanted some of the song’s Southern energy into Hamilton, Ontario’s historic Gage Park.

“This video shoot was so much fun,” Lightfoot recalls. “We borrowed some bikes from my manager’s mom, and Mat made a mask to look exactly like my drummer Frankie (who is American and couldn’t cross the border to be with us). The video shoot was mostly me yelling “AWWW” at every dog that walked by. Gage Park is a local dog-walking mecca, so this probably happened every five seconds. Mat was shooting from a rickety old bike trailer I borrowed from a friend, so the other half of the video shoot was me asking “Dude… are you okay?” While we were shooting the bandshell performance, a French immersion pre-school class was watching us from the field. It was probably a half hour of the same song, but they loved it and danced the entire time. That’s definitely the vibe you see on camera.”

“We came up with the idea after Terra was texting me photos from a sunrise bike ride and the light looked amazing, I knew Terra was going for a lot of bike rides during the pandemic and thought it could be a fun thing to lean into. It’s such an unabashed love song that it seemed like the video needed to have Terra front-and-centre with her heart on her sleeve. It’s also a rocker, so we added a little glam flavouring with the stars and the band as silhouettes just to keep it fun and weird. In the end, it was one of the most enjoyable video shoots ever because we basically just biked around Gage Park while Terra waved and sang to every dog in sight.”

Watch the video for “Consider the Speed” below and stay up to date with Terra via her socials.