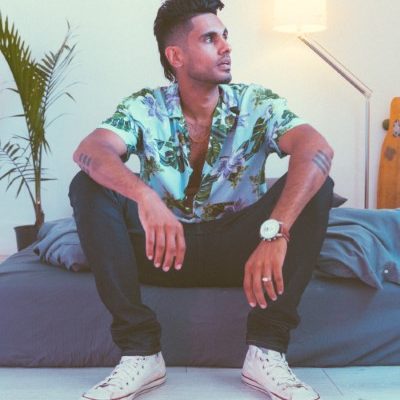 The Vancouver-based artist is best known as the frontman of world music group Delhi 2 Dublin, spanning a 14-year career with the band. In that time they played on premiere stages including festivals like Glastonbury and Burning Man — not to mention reaching the third spot on Canada’s world music charts with their debut album “Journey to the Sun.”

“Jealousy” is a spacey synth track produced by Vancouver’s KULTARGOTBOUNCE. A labour of electro-pop love, the track is influenced by SAINt JHN, Roy Woods, and The Weeknd. “Jealousy” takes you on a journey exploring the push and pull between love and desire.

Being in Delhi 2 Dublin for over a decade, why was now the right time to step into a solo career?

What better time than during a pandemic where the future is totally unpredictable, and musicians aren’t touring to create and explore one’s self when kind of forced to be by one’s self right?! Also, with D2D’s full 2020 schedule being pushed to 2021, there was finally some space to sink myself deep into another realm.

I do acknowledge the numerous little events and coincidences just serendipitously unfolding for me, like everything I have done up to now has led me right here right now working with all the right amazing people. But If I’m being real, I probably wouldn’t have known this was the right time to launch a solo project if the universe hadn’t slapped me in the face telling me it actually is.

What’s been the biggest lesson you’ve learned from your time in the band?

That it can be done. Dreams can happen. I have already performed all around the world and done things I never would have imagined. With tremendous gratitude, I can say I’ve done and seen more than most musicians get to do in an entire lifetime. So, I like to consider this as pure bonus time. It is fun to be in bonus time.

Did you have a clear idea of the music you were going to make, or has it been a process of discovery/experimentation?

Before I went to the studio for the first time to start this project off I had spoken to what I like to call my Galaxy One advisory council, so going into the session I had somewhat of an idea as to what I wanted to create and how I could best portray myself in the most realistic way possible. But then KULTARGOTBOUNCE started working the beat up. I swear mystical things happened. SNJÜ was born. I was me and it was flowing, and I had no doubt that this was my sound. The first song was written in an hour and tracked and mixed in the next three. It was powerful.

What makes “Jealousy” such a special song?

It’s the first solo release in my professional career. A new trajectory in my life, so it holds a lot of weight but having said that, it all just feels light – the whole project thus far has. I think even the pure reason it exists alone is enough to make the song special beyond words and I say this with the humblest of attitudes. I think any creation is a marvel. This one, like many things, was created out of a personal choice for it to manifest but it also happened with collaboration and so taking into consideration the numerous paths and lives converging to the exact instance of musical inception all with such ease – absolutely divine! If we step away from the existential aspects though; the song is dope just ‘cause I’ve been doing this a long time and know dope sounds when I hear them. This a vibe and captures a moment in my life timeline perfectly. Now that is special if you ask me.

Do you have any plans for a full-length album this year?

I have got enough music to release singles for the next couple of years so, I guess yeah, sometime within the next year or so it would probably make sense to drop an EP or full-length. Especially if I feel there is a collection that should be introduced to the world as one body of work.

Do you have a vision for where you see your solo career going? Any major milestones you hope to reach?

To be perfectly honest, I have learned one solid thing during COVID – I have no clue what is happening, I never did, but now I just understand that on a whole other level. So, I don’t know, but I do know I’m going to keep following the joy; if I can achieve that I have no doubt any milestone I do think of in the future will be attained. Like I said earlier, at this point in my career this is all bonus time. And that is liberating.