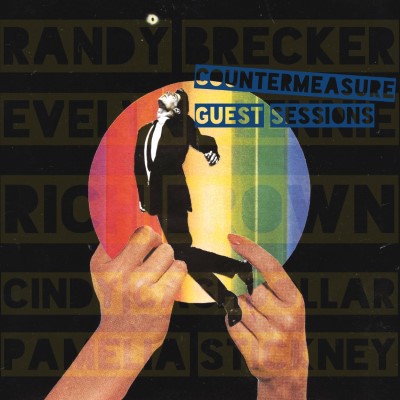 A vocal group comprised of 13 members might seem a bit ambitious in the first place, but Countermeasure have proven in the past that they have what it takes to pull that off, and oh so well. On Guest Sessions, their third album, they up the ante even further with a star-studded roster of additional personnel.

As the title might lead one to surmise, this release is filled with guest musicians—a different one per each song, to be precise. And these are of the highest caliber. On one track you’ll hear JUNO-winning fiddler Natalie MacMaster providing the instrumental basis for a rousing vocal ode to the women who shape men (“Here’s to You”),  while on “Moments Between,” a song that so perfectly describes what an ideal love should be, Grammy-winning Cindy Cashdollar appears on dobro. Not to mention all the instrumentalists on other tracks who hold accolades of the same or similar prestige.

You should by now have a bit of an idea about the diversity of styles on the album, in addition to the range of musicians. Other examples are the swingy jazz style of “Wanna Make You Happy” featuring guitarist Christian Roberge, or the classically playful duet “Obvious Pair” with Charlie Gabriel on one side, and a cameo by Rich Brown on the bass-centric “Someone,” which delightfully bursts into a full-on gospel vibe in its final moments. At other times, the listener is treated to expert trumpet, cello, theremin, and more. The talent and variety contained within this album is abundant, with the endlessly inventive vocal work of Countermeasure ringing brightly at its core.

Guest Sessions has a bit of something for everyone, it seems. If you can’t find something here you like, I’d be thoroughly surprised.