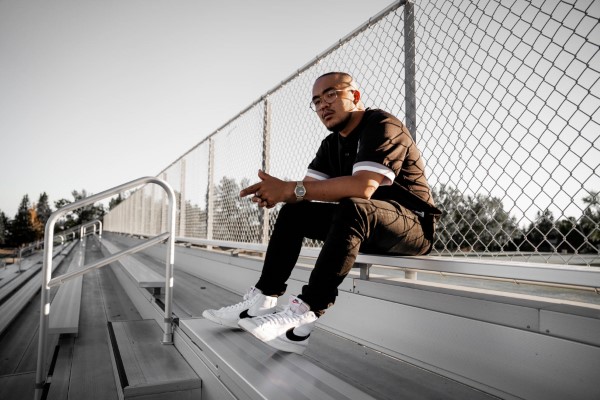 Arriving in Canada in 2014 to work as a live-in nanny, Lyrique’s rhymes are a glimpse into his personal struggles as a temporary migrant worker. Now a permanent resident striving to fulfill his ambitions, Lyrique’s account is one of many within Canada’s Filipino diaspora.

Check out P.I.M.P. (Poetry is My Pleasure) on Spotify and all major streaming platforms now, and find out more about Lyrique in our Five Questions segment.

My name is Edward Que. I’m a rapper who performs under the name Lyrique. I write songs, produce music, take photos, do graphic art, and during the day I care for adults with special needs and disabilities. I just released my debut album, called P.I.M.P. (Poetry is My Pleasure), which came out of a period of self-reflection over quarantine and offers some insight into my personal hardships after moving to Canada. The first few years were very difficult. I had to get my mind right because of all of the things I was dealing with—barely having enough money to get by, being discriminated against, having an employer that was treating me poorly, and just always being stressed out.

I was on autopilot mentally until I started writing this album. It was a rejuvenating process. I tried to reinvent my sound and create something truer to myself. I learned a lot. I drew influences from reading Stephen King to listening to Lauryn Hill. It’s been a very zen time for me.

I tried to switch it up this time. I really tried to get uncomfortable with the writing process. Reading books and watching different films helped me create more thoughtful stories and metaphors. I study the work of others to get better at my own craft. I keep a music journal where I’ll write down my favourite parts of an album or what I thought didn’t work. When writing my own songs, I usually come up with a melody while listening to beats. Once I’ve found a melody that really sticks, I work around that and try to find a concept, story, or mood to accompany the instrumentation.

I try to blend lo-fi and boom-bap sounds with some R&B and trap elements. I really love how music can create a certain mood or atmosphere. I’m a big fan of artists such as TLC, Outkast, Lauryn Hill, and Kaytranada. They’re masters of atmosphere through the beats and melodies they fuse. I’m also a big fan of Soulection Radio, which brings hip hop, soul, and R&B vibes together with such ease.

I performed live last week at Café Koi with K-Riz for the first time since the pandemic hit. There were a lot of restrictions in place to make it safe, but it was fun. I don’t think I’ll be performing too many more live shows anytime soon. Usually, I perform with DJ C-SIK (Red Bull Thre3style Canadian Champion). The energy between the DJ and MC is so integral in hip hop and you can really feel that dynamic in our live shows.

It would have to be “Live Well.” It’s one of my best songs to date. The melody, the flow, the rhymes, and the lyrics are a great representation of the sound and image that that I’m trying to project as Lyrique. The track tells a story but has a deeper message, as well. It’s about setting your sights on a goal and persevering through the lows.

K-Riz is an inspiration to me, man. I saw this guy perform live five years ago and was really impressed at his all-around stage presence. He has that “it” factor in my opinion. This guy is a triple threat (singer, rapper, and producer).

Dali $oul is a Vancouver artist that will be going places very soon. His aesthetic and his songs could resonate with young people and OGs in the rap game. As his name states, this kid has soul but at the same time, he’s got substance in his bars.

Nate Lesco, or “POPSTAR” as he calls himself, is one of my favourite Calgary artists. He can sing and will catch you off guard with how well his raps flow in between his melodies. I really admire his vision and how he embodies his music.

Kaeyae Alo is a Calgary songstress that in my opinion is on the brink of going places. You can feel the passion and soul in her notes. She can traverse swagger and elegance like no one else. She is a queen and I’m excited to see where her future releases take her.

Serenade is another Calgary artist that people need to have on their radar. Serenade is a genius. He has such unique ways of bringing together his visual art and moody vibe. He’s got an R&B sound that was built out of cold Canadian winters.