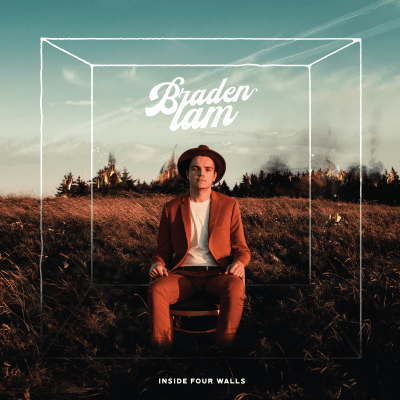 Inside Four Walls is the newest EP from Halifax based artist Braden Lam.

Inside Four Walls is full of Lam’s overwhelming love for his loved ones, but also of the environment. Each track contains a ramping momentum that bursts like fireworks when the swell of emotion becomes unbearable. Lam’s voice is determined, yet eternally optimistic, even when delving into upsetting topics such as an unbearable breakup or environmental devastation. Using a well-produced accompaniment of guitar, drums, samples, saxophone, and female backing, Lam takes sad topics and builds them into resilience, calls to action, while elevating the tracks with pleasant messages to higher levels of elation.

It’s also worth noting that Lam’s love of his fellow humans and the environment does not just stop at this album. As a part of the EP pre-release, Branden pledged to plant a tree in Atlantic Canada for every purchase, eventually funding over 100 trees to be planted! Lam additionally, pledged proceeds of merchandise sales to the charity Hope Blooms in Halifax – a community gardening organization that empowers local at-risk youth with unique skills and food security.

A standout track for me was Forest Fires. Another dynamic track, this one is a standout as much for its dramatic subject matter, but also its deft lyricism. As Lam’s press notes, the track is:

based on a lived experience. In 2019, while working on a campaign to stop oil drilling in the Arctic National Wildlife Refuge, [Lam] attended the biennial Haa Kusteeyi celebration on the lands of the Carcross/Tagish First Nation in Canada’s Yukon Territory. Mere kilometres away, forests burned in a record season of them—as Lam sings, “I haven’t seen blue skies in seven weeks now.” The irony of celebrating an earth concurrently being destroyed was not lost on the songwriter and climate activist.