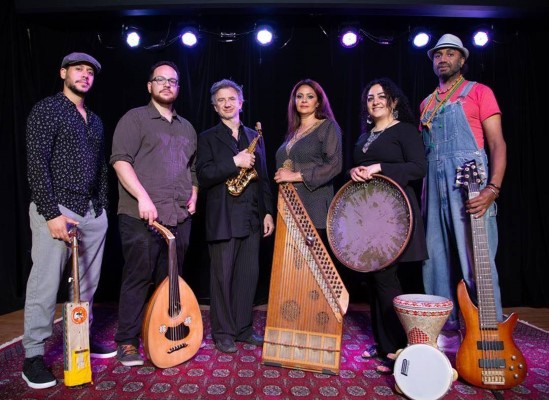 Toronto, ON-based group, Al Qahwa Ensemble has released the first single, “Marrakesh” from their upcoming album, African Routes, which is set for release on November 27, 2020.

The single is composed by Maryem Tollar, with a vocal drum break by Ernie Tollar. It starts from a bassy, gently-plucked Moroccan gimbre solo; moves to a repeating, super-energetic “Hey-Hey!” and “Do-Mi, Do-Mi, Do-Fa!” solfage call-and-response chorus set to a persistently percussive rhythm track; and yields only for a single calmer verse, first sung in French, then in Arabic. The song fairly crackles with the hustling, bustling energy that you’d find in the old market of the titular city, in Morocco.

“Marrakesh,” was inspired by the all-women group B’Net Marrakesh who performed on the Canadian Folk festival circuit the same summer as the Tollars’ group performed. They sang a particular chant “Hey Hey Hey Hey,” that  Maryem couldn’t get out of her head, even after the summer was long over. This song is the result.

The video, which you can check out below was produced, assembled, and edited by Ed Hanley with live video edits by Cathy Ord. The audio was recorded by Reza Moghaddas at Small World Music Centre. Additional footage by Omneya Tollar who filmed the beach with Roula Said and Maryem Tollar and who filmed the close-ups of Maryem (red shirt, blue room).

Listen to “Marrakesh” below and stay up to date with the Al Qahwa Ensemble via their socials.