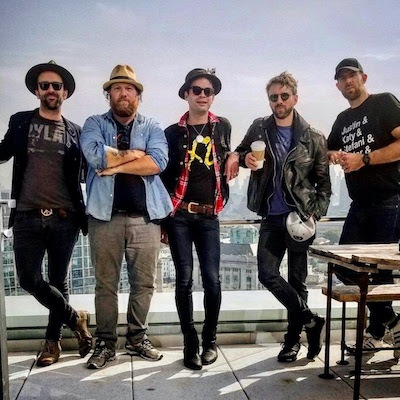 Last week, Nova Scotia hard rock band The Trews released a very timely cover of The Who’s classic “1921”. You can stream/purchase the track here, or watch the video below!

On deciding to cover this track, guitarist John-Angus MacDonald digs in saying:

When we were a young band just starting out in Antigonish, NS, we decided, for reasons that no one outside of our own band encouraged or supported, that it would be a good idea to cover the Who’s 1969 rock opera masterpiece, “Tommy” in its ENTIRETY. So, we did. And the only time we ever did it live, on New Year’s Eve 1998/99 in Halifax, NS at the Economy Shoe Shop, we completely cleared the place! In retrospect, this makes total sense – I mean, who wants to listen to a 111-minute opus about an abused child who goes on to become a pinball champion, a global sensation, and then, ultimately, a martyr on a night meant for celebrating? But obviously, it all made complete sense to us at the time.

So, when the idea was brought up this past summer that 2020 was the right time to revive the album’s third track, “1921”, with its prophetic and hopeful mantra, “got a feeling ‘21 is gonna be a good year”, we knew we had to do it. And when we found a dude named Thomas D’arcy (Tommy can you hear me?) whose second cousin, Oliver Reed (who shares a name with my firstborn nephew) just so happened to star in the 1975 film version of Tommy and actually sang THIS song in the movie, we knew the serendipity was too much to ignore. So, we cut it live off the floor at a half-day session at his place in Toronto in early September. Another half-day to mix it, and here you have it. Here’s to making ‘21 a good year!