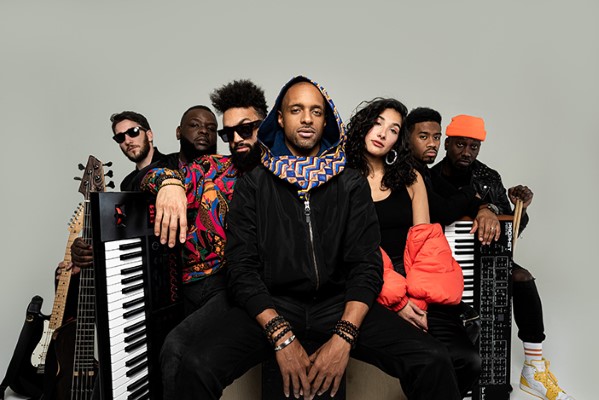 Canadian artist and producer Fredy V. and his powerhouse band The Foundation are back with a new single. A modern funk mixed with a classic throwback, “One Step”.

The song holds a strong message, and lands ahead of Fredy V. & The Foundation’s forthcoming EP, One Step — set for release on October 30, 2020.

“It’s got a nostalgic mood while still remaining relevant through its lyrics,” Fredy V. says about “One Step.” “There’s an empowering message in there, too — the importance of taking a leap of faith towards your purpose.

“It’s an anthem for aspiring performers, creatives, and entrepreneurs.”

The notion directly aligns with the group’s initiative to produce the EP in the first place, he adds; in the spirit of the single, Fredy V. & The Foundation have partnered with the Montreal-area Dynastie Sports Institute — aka not your average basketball academy.

“Dynastie are dedicated to recruiting and developing high-level French-speaking talent from countries like Congo, Guinea, France, and Ivory Coast with the goal of ushering the next wave of NBA players out of Quebec,” Fredy explains. “The journey of an aspiring professional basketball player and the come up of independent artists are very similar in numerous ways; there’s lots of crossover in the goals, including ownership, entrepreneurship, positive media relations, and a mission to improve their respective communities.”

In honour of the partnership, Fredy V. & The Foundation and Dynastie Sports Institute have developed the #OneStepMission, a promise between the two ‘teams’ to take at least ‘one step’ towards their goals, their dreams, and their ‘why.’ The song’s video was shot at the Institute and features the ’20-’21 roster, and a documentary detailing the unique journey of Dynastie and its players is in the works.

Check out “One Step” below and find out more about Fredy V. and The Foundation via our Five Questions With segment.

My name is Fredy V, artist/producer and founder of Fredy V & The Foundation. I’m originally from Senegal and Cape Verde, grew up in the Washington DC area, and established Montrealer for quite some time now.

I guess you can say we play contemporary R&B and Funk music mixed with Afropop influences. Instrumentally our style for the most part is based on heavy grooves, distinct basslines, and different synth textures inspired by the 80s modern funk era. We have both male and female lead vocalists, so we aim to write catchy melodic phrases and support them with vocal arrangements that cover a wide range.

As of right now, we do not have any upcoming shows, unfortunately. We wanted to perform for the launch of our EP on October 30th, but Quebec is now in a Level 4 – Maximum Alert for COVID-19 so doesn’t look like that will be happening. We are keeping our fingers crossed for the return of our TV talk show gig on CBC / Radio-Canada ​Les Poilus​ at the end of year. We miss being the house band and playing our new music to the entire province every Sunday evening.

Our live show strikes a balance between musicianship and entertainment. As a 7-piece band, each member displays their talent and personality throughout performances. Our relationship with our audience is extremely important too. We bring the dance floor experience to live concerts.

It would probably have to be the next single from the upcoming EP “Your Own Way”. It’s a song that really shows the diversity of our sound from west African rhythms to that summer bbq Americana funk. Plus the song is kind of special to us because it was heavily inspired by our trip to Cape Verde for a performance at the Atlantic Music Expo.

We have shout-out some of our Montreal contemporaries putting out some dope music like Shay Lia, Busty & The Bass, Kallitechnis, and KNLO to name a few. As for producers gotta give up to Shashu, Anomalie, Kaytranada, and Pomo to name a few.