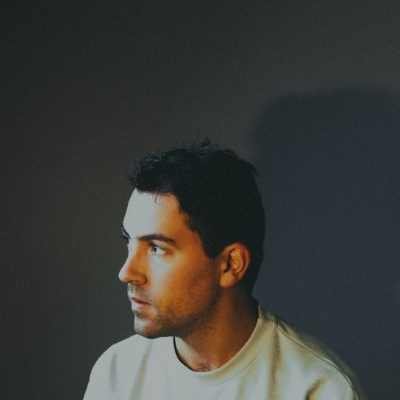 Montreal’s Élie Raymond (otherwise known as the lead singer of Foreign Diplomats and also a member of Totalement Sublime) has shared his debut single, “Tintin Panels & Eternal Life”, along with a video to accompany the release.

The dreamy and atmospheric song is the first single off the forthcoming Panels, an introspective solo album to be released on November 6 via Bonbonbon Records.

“Tintin Panels & Eternal Life” was born out of a jingle that Élie was trying to create for a publicity contract. He found the chord progression had an interesting nostalgic sound so he decided to keep it and deepen the idea into a complete song. Directed by Vincent Bonin-Arena with support from cinematographer Nicolas Poitras Gamache, the video of “Tintin Panels & Eternal Life” illustrates the contrast between an embraced and welcomed calm alone and the everyday life filled with noise and movement. The direction is slow and centered on the protagonist despite everything going on around. A paradox that is also highlighted in the lyrics of the song.

“The song is about the extremes in between our general desires (a good meal or a big fortune, a night out with friends or peace on earth, comics or eternal life) and we wanted to show that in images. The video combines two things that I love: the Laurentians, which are great and awesome, and dogs, an everyday life aspect that brings happiness to a lot of people”, explains Élie Raymond.

The song title is a nod to Élie’s love of comics and Hergé’s work. He also has some panels of Les Aventures de Tintin hanging on his walls.

Check out “Tintin Panels & Eternal Life” below and find out more about Élie via our Five Questions With segment.

Hi. I’m Élie. I play in two bands now, Foreign Diplomats and Totalement Sublime. I wrote an album on my own last year and I’m releasing it on November 6th. I tried stuff I’d wanted to try for a long time on those songs. I play almost every instrument on it except for a couple of friends featuring here and there.

I usually write songs with a lot of arrangements, many instruments playing against each other. For this particular project, I tried to get away from that and write simple songs with fewer instruments and to treat them in a way I wouldn’t have done before. The lyrics are kind of like that as well: no deep metaphors, no complicated images or words, just bluntly describing feelings and details on everyday life.

No…we all know why. But we’re still practicing and trying to play the songs. I think we’re trying to be a bit more raw and natural than on the recordings. More like five guys playing in a dirty basement than the produced yet lo-fi sound of the album.

I think it would be Beautiful Delicate Destroyer. I like the lo-fi and kind of circling vibe of that song. I remember recording the vocals of the second part, standing far away from the mic so I could also record the room and hear the sounds of the world outside.

Oh, that’s a hard question. There are so many great musicians here! These days, I’m really into Tim Hecker. I’ve been listening to his music for a long time now but I just got back into it and it’s awesome. Classics like Neil Young and Joni Mitchell (Hejira is one of the best albums ever made in my opinion). There’s also a lot of insane music in Québec: Choses Sauvages, Jimmy Hunt, Corridor, Fred Fortin, Lydia Képinski, Larynx, Mon Doux Saigneur, Laurence-Anne. I reeeeally love Sandro Perri. Godspeed You! Black Emperor. I could go on like that for a while…