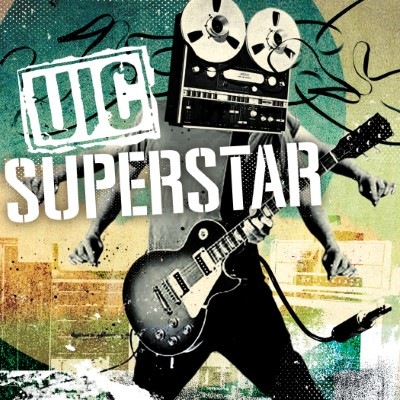 Ontario’s UIC will be releasing their new album, FM Hill on October 19, 2020, via Like Ninety Records.

Today, we are happy to help them unveil the video for their single, “Superstar”, in advance of the release.

“The sentiment of the song is a salute to every musician that hits a stage somewhere to give it their all, leaving nothing behind, for a crowd who’s number matters little. Playing In front of 10 fans or 2000, it doesn’t really matter.  These are the unsung heroes of rock & roll who aren’t actually Superstars…except for that 1-2 hr set that they are up on that stage kicking ass. There, that night, for that hour….they are superstars, if only in their own minds. It’s a beautiful and addictive thing that keeps people loading $5000 worth of gear into a $2000 van and traveling 100 miles, spending $75 on gas to play for $300. It’s a beautiful thing.”

UIC will also play their first in over 6 months on October 24, at The Legendary Horseshoe Tavern in Toronto for the Horseshoe Hootenanny, unveiling their new album, as well as playing hits from their decades-spanning catalog. Can’t make it? The show will also be live-streamed live across the globe.

Livestream airs around the globe!

Check out “Superstar” below and find out more about UIC via our Five Questions With segment.

UIC is and always was a high energy Rock & Roll band. In the early days, we would get labeled as a Punk Rock band because we didn’t really fit anywhere else. We mostly wrote and created from a positive space and while we played aggressive music, we weren’t really as angry as some of our Punk Rock contemporaries. We identified with the ferocity of punk rock, however, we always felt more in line with artists like The Stooges, MC5, and even Radio Birdman from Australia. Other American bands that we identified with were the Ramones and Replacements. We were heavily influenced by fellow Canadians Teenage Head.

UIC has always been a band that collaborates on the music. We usually start rehearsals with a jam session to get warmed up. Someone brings in a riff they are jamming on and everyone adds their parts. The lyrics most often come later. As the drummer, I also write a lot of lyrics. I often have 3 or 4 song lyrics I am working on in my head at any given time.  When I hear a riff that I think suites the lyric I bring it forward. Lead singer Dave Robinson is the consummate jam vocalist. He is better than anyone I know at creating lyrics on the spot.  There are certainly times when people will bring in a completed song and we will arrange it. I often have a melody I am working with when I write lyrics. Sometimes I have the basics figured out on guitar. I am a really lousy guitar player so it is very basic. In the end, we really just write Rock & Roll songs about life and life experiences. We typically aren’t very political, we try to write good positive songs about what we feel and know.

Playing Live is really tough if not impossible right now with the entire COVID 19 issue. It has been tough on bands and musicians. We played a drive-in show recently at Ontario Place in Toronto. It was very strange to play to people sitting in their cars. They would beep and flash their lights at the end of songs rather than yelling and clapping. We were skeptical about what it would be like, however it ended up being a pretty cool experience. We also got honked back on stage at the end for a, wait for it…..honk-core. HAHA. That was a first. UIC’s next show is our Album Release show for the new record FM Hill (Like 90/Warner Records) at the Legendary Horseshoe Tavern in Toronto on October 24th. It is a Livestream event in the Horseshoe Hootenanny series. There is a limited number of 50 people that can be in the club. That is now sold out, however with recent changes due to increased COVID numbers, I do not know if the 50 people will be reduced? There is lots of room on the internet, it never sells out. If you want to see a high energy rock & roll show, it is the place to be on October 24th. The stream and Tickets are available through Eventbrite.

I think I would recommend our first single coming out October 9th called “Superstar” it is a straight forward Garage Rock song that will appeal to a large cross-section of people. The sentiment of the song is a salute to every musician that hits a stage somewhere to give it their all, leaving nothing behind, for a crowd who’s number matters little. Playing In front of 10 fans or 2000, it doesn’t really matter.  These are the unsung heroes of rock & roll who aren’t actually Superstars…except for that 1-2 hr set that they are up on that stage kicking ass. There, that night, for that hour….they are superstars, if only in their own minds. It’s a beautiful and addictive thing that keeps people loading $5000 worth of gear into a $2000 van and traveling 100’s of miles, spending $75 on gas to play for $300. It’s a beautiful thing.

First of all, thanks for being about Canadian music. We need that. We tend to operate and hang out in more of the indie scene. The big guys already get lots of press. I have always loved anything that Ian Blurton has done. I loved Blurtonia and his new venture Future Now is pretty impressive and wild. He also happened to mix our new record. We are all older guys now, so we likely aren’t up on as many of the new bands. One band I have checked out is PUP, they are pretty cool. Rumour has it that one of the members of PUP is from the same small Southwestern Ontario town that we grew up in, Exeter Ontario. We all love The Sadies, they are just a really special band. Other bands are Arc Sound, Rainbows in the Dark, Enchanters, and Holly Clausius who also happens to be a cousin of mine, I am also a huge Royal Crowns fan. We also still love all the Canadian garage, punk rock, and indie bands from back in the day. Teenage Head, The Gruesomes, The Legend Killers, 63 Monroe, The Purple Toads, Durango 95, The Stand GT, The Ripcordz, Nomind, Change of Heart, SNFU, Jerry Jerry & The Sons of Rhythm Orchestra, Deja Voodoo, Tricky Woo, there are just so many. Someone is probably pissed that I missed them. We simply love to see all Canadian Indie Bands do well.