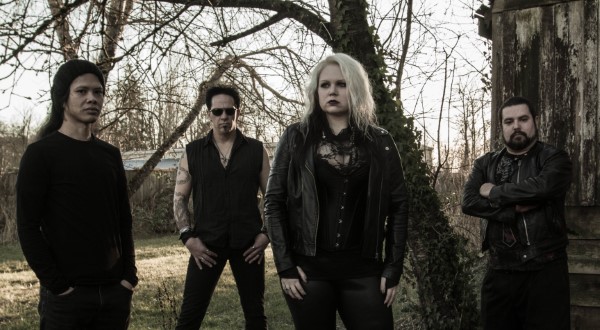 Vancouver, BC-based hard rock band, Celestial Ruin started taking over the local scene in 2011, with their album, The Awakening.

In 2019, went to LA to record new music with Producer Mike Plotnikoff (Halestorm, The Cranberries, Three Days Grace, Motley Crue) at West Valley Studios. Their first single, “Heart Shaped Ashes,” gained over 200,000 plays on Spotify in less than 2 months. The accompanying music video (directed by Dave Benedict (Default, Bonds of Mara)) was released one month later. The video was praised for its amazing visuals and professionalism.

They have recently released their second single, “Last Chance“, and continue to write new music during the COVID lockdown.

Check out the video for “Heart Shaped Ashes” below and find out more about the band via our Five Questions With segment.

We are CELESTIAL RUIN. We’re a hard-rock band out of Vancouver, BC and we’ve been playing together for almost 10 years.

We started off writing symphonic metal at the beginning of our careers but in the last 2 years have grown and transitioned to more North American hard-rock. We have really enjoyed writing music with more edge, catchy hooks, and melodies.

We have had various approaches to the way we write. The first two albums (The Awakening and Pandora) were written by the entire band sitting down in the same room and just pitching new ideas and riffs. If I felt a connection to something, I would develop that into lyrics and melodies.

For the songs we wrote for Mike Plotnikoff in LA, myself and our guitarist were a bit more hands-on in those pieces. He would program some of his ideas into his computer and send me his riffs. Then once again I would see if I felt any emotional response to the music.

Moving forward, we have once again been writing as a band and even started working with other talented musicians outside our project. We always continue to grow and evolve.

Obviously, due to COVID, we have no live shows coming up anytime soon. We are all extremely sad about that and missing the stage and our fans. We cannot wait to play live again.

Our live shows are insane! We go all out with our visuals and theatrics. We want to be a band you remember. We are not a gimmick band by any means but we love to always keep you guessing as to what we are up too next. I won’t say anything more;) You will have to come to see us live to find out.

That’s a tough one as some of our music, though all hard rock, can appeal to many different types of people.

If you love European symphonic metal I would suggest checking out “SENSE of EXILE.”

If you are wanting a more North American style rock I would recommend “HEART SHAPED ASHES” and “LAST CHANCE.”

Our music has something for everyone.

We have a major love for BONDS OF MARA. Such a killer group of guys! They’ve got a great sound and you would not believe the pure, raw energy these guys put out on stage! We cannot wait to share the stage with them one day. Nothing but praise those dudes.

Also, the guys from TWO CAR TRAIN also put on an awesome show. Great traditional rock coming from them.

UNLEASH THE ARCHERS is bad-ass if you wanna hear some insane power metal. I love Brittney’s vox and the fact that she is just the sweetest individual you could possibly hope to meet doesn’t hurt either.

Lastly, I have to mention BRITTANY ANDOW, this chick is a sick local rapper. She just keeps evolving. Her music has is so honest and has some awesome hooks. You will get soooo many of her choruses stuck in your head, lol.