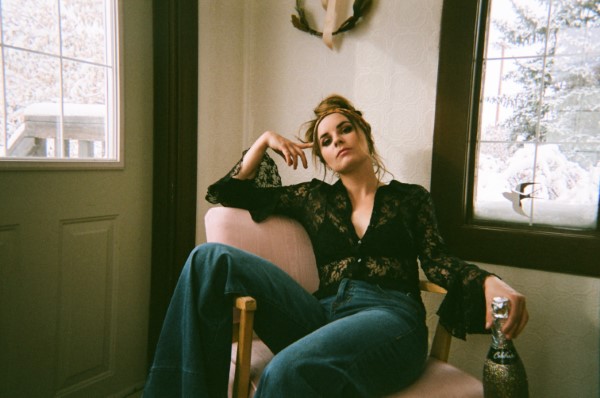 There are times when an artist releases a new single that touches the listener from the very first strum of the guitar quickly followed by captivating them with the very first lyric. The latest artist to do this is Alberta’s Mariya Stokes on “Rebound”. Not only does it capture the pain of not being “the chosen one”, but gives a sort-of strength for those needing to shed some tears in order to get back up again.

Your new single, “Rebound”, is the type of song that makes someone flashback to the heartbreaking lessons learned. Did you have to put yourself in a certain mindset to write & record it?

Absolutely. When I was going through this situation – being in love with someone who was still in love with their ex – I was confused and hurt. I’d written songs about this relationship from an angry, resentful place aimed at the person I was seeing and also at myself. I knew they were emotionally unavailable at the time, so I was embarrassed that I let myself get in that deep. “Rebound” was written from a place of reflection and compassion. I am so thankful that with a little time, I was eventually able to see both sides, as well as my own growth. That’s the space this song lives in and I hope when you listen to it, if you’ve been in this situation, you know you’re not alone.

Recording was another story – I really dove into the headspace of feeling hurt and recording this song was painful and cathartic at the same time. My producers, Spencer Cheyne and Justin Kudding threw ourselves into the vocals. When I left that session, I felt like I’d finally processed the situation and I’m thankful they gave me a safe space to be so vulnerable while recording.

The song is also such a different vibe from your previous releases, “Hands on My Body” and “Christmas, Arizona”; do you have a preference in the creative process between the more upbeat, fun-loving songs and the slower, sentimental songs?

Fun-loving songs like “Hands on My Body” and “Christmas, Arizona” are a blast to record. While I was writing and recording “Christmas, Arizona”, I was playing a character and had a riot getting into that mindset and imagining myself as a person who would chase a man across America. That girl is in me somewhere because I wrote that song (hahahaha – eek!), but she usually doesn’t come out unless I’m singing it. With “Rebound” and songs like it, I’m reliving experiences that are very real to me and are sometimes painful and difficult during the writing and recording process. I don’t think I can choose one or the other; I really need both for different reasons. Fun songs usually let me escape reality and sentimental songs force me into it – I love both.

Please tell us more about opening for RuPaul’s Drag Race superstar Trixie Mattel! How did that opportunity come about?

In July, 2019 during the Calgary Stampede, I was so fortunate to open for Trixie Mattel and play guitar and sing backup in her band at the Palace Theatre in Calgary, Alberta and it was an absolute trip. Nice Horse was also an opener and played in Trixie’s band as well and it was an incredible experience. The show was one of the first queer concerts of that size in Calgary and had mostly female musicians on the bill which doesn’t happen very often in country music; it was very special. I will never forget how kind Trixie is – she took time to hang and chat with everyone in the crew and band and was incredibly generous with her time. It was a privilege to play guitar and sing with her; her songs are thought-provoking and hooky, and she’s a great singer and guitar player. Playing with Nice Horse was awesome as well – I look up to them a lot.

The concert was organized by Hot Mess Events and Eat North. Dan Clapson from Eat North invited me to open and that show was the beginning of a beautiful friendship. That show was a game-changer for me, personally and professionally.

You’re also an Artist in Residence for the Women’s Centre of Calgary in 2020 while having previously worked with the Calgary Drop-In and Rehab Centre. What inspired you to get involved? What’s your biggest take away from the time spent with the clients?

Being an Artist in Residence at the Women’s Centre is a huge honour and I’m so thankful to be part of that space. Since 2015, I have volunteered at the Calgary Drop-In and Rehab Centre and loved my time there. Empowering women is extremely important to me and after discovering the Women’s Centre of Calgary through a friend and doing research, I really resonated with their values of inclusivity, trust-based practice, and community connection. The Women’s Centre is a safe, open, drop-in space for women of all ages to find community, use public computers, have a coffee, and attend free workshops. They strive to create a sense of community for women of all backgrounds and I love that.

Most of my time with the Women’s Centre has been spent with Girls Lead YYC which is a program for girls from grades 10-12 who want to lead, influence, and participate in collective action to improve their communities and beyond. I have been teaching zoom songwriting workshops for the past few months and we are focusing on songs that are focused on female empowerment and why girls rock.

The young women in the program are smart and informed – so far ahead of where I was at that age. We have conversations about social pressure, beauty standards, politics, and why acknowledging feelings (even when they aren’t pretty) is so important. They astound me with their creativity and song ideas. My biggest takeaway from my time there so far is that the next generation of women are ready to take on the future and it looks very bright and very female. I know each and every one of those young women are currently and in the coming years are going to have a huge positive impact on the world and I’m excited to continue watching their journeys.

My touring plans have been put on hold until it’s safe to do so and I am fortunate to have this time to focus on writing for the time being. In December, I’m sending “Christmas, Arizona” to Canadian radio again in time for the holiday season. Keep your eyes out for new music in early 2021 as well – I have a couple more songs recorded and I can’t wait for you to hear them!