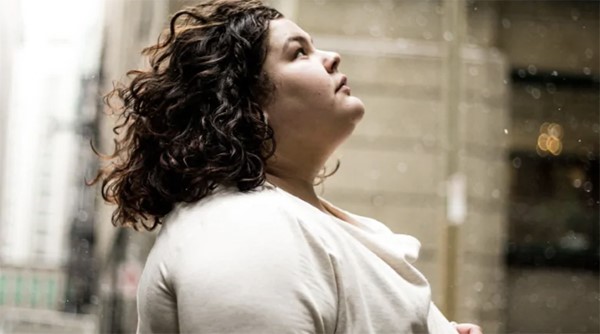 At 48,000+ streams across platforms, queer, non-binary, Indigenous pop singer-songwriter Angel Baribeau’s messages and representation presented within For Those I Love(d) continues to land loud and clear.

With the album taking a Top 3 spot on Apple Music Pop Canada’s charts soon after its Summer 2020 release, the six-track EP’s debut single “Love Is Up The River” quickly garnered more than 17,000+ streams on Spotify and hit Top 10 on the NCI FM Indigenous Music Countdown hosted by SiriusXM Canada; single “Wish We Were Older” followed its path with another ~ 18,000 streams, and was featured on CBC North.

“I named my EP For Those I Love(d) because I realized the songs all represented love I had or have for people that have come through my life,” Baribeau shares. “Whether they are here still, or on their own path, this project aims to honour the love I felt and feel.

“I had many Moms growing up,” Baribeau continues. “Powerful women that showed me love in the times I needed it most. My Moms gave me the tools I needed to be who I am and, in fact, they did the heavy lifting when it came to building up my own strengths. It was the women around me that taught me to be brave, to exist without apology, and to love without fear. These women were blessings and I am forever grateful for their love.”

They also nurtured Baribeau’s primary introduction to music. “My Gookum is hard of hearing but, growing up, I never saw her let that take away from her love of music. She would play her guitar even if she couldn’t hear it was out of tune, or blast her music so she could hear the lyrics. Gookum loved music because music is for everyone.

“My Mom and other women would sing me the ‘Meh Meh Sou’ chant as a lullaby, and eventually I would come to use lyrics to communicate my own emotions. Whether I was crying over someone who broke my heart, or even after breaking my own, music was always there; it has helped me through almost every stage in my life.”

Ultimately, Baribeau’s goal is to be that of a changemaker, noting the responsibility they feel to pursue their talent to create more representation within the industry for those who look and identify as they do.

“It’s important to see yourself in the world, and to have an image reflected back at you that accurately represents you,” they say. “To see that positive imagery is fundamental to a child; at least, it was to me. If you don’t see yourself in the world, you might come to question whether your existence is valid. I felt this way for many years while growing up and it was only when I saw more folks like me I realized it’s okay for me to take up space.

“I want to do that for others,” Baribeau continues. “In my own intersectionality, I represent so many more folks that are constantly under-represented in my communities and mainstream media. I want people to see me and know our existence is valid and needed; to feel like you’re not alone is a powerful thing.”

Check out the EP below and find out more about Angel via our Five Questons With segment.

I grew up on a reserve in Northern Quebec. The land I am referring to, I know as the Eeyou Ishtchee. I belong to what settlers called/categorized as Eastern James Bay Cree, specifically inland dialect. The first language I spoke was eenou yimuun. However, overexposure to English media and moving on and off-reserve throughout my childhood meant that English would become my first language.

I saw very little representation of people like me in the media growing up. Not just as an Indigenous kid, but as someone who does not identify with colonial impositions of gender. This is would later find out as a late teen is because of a purposeful erasure of Queer Indigenous/2-spirit Identity. Queer identity was demonized in early colonial settler times because it challenged views of the colonizers ways of life. Even today, Post-Colonial society imposes the belief that a person is supposed to live as one of only two genders. For the longest time, I didn’t understand what my own gender was. I was raised under the colonial belief that I had to be assigned my gender off of what my sex is. It wasn’t until I was working in an environment with other non-binary folks that I realized my identity is valid too. I was not alone. Now, I openly identify as non-binary and provide representation to youth in my nation by occupying space and trying to be a positive representation of queer eeyou/eenou youth.

Erasure of identity was and is an over present theme in my life. Not just in mine, but that of the lives of all my Indigenous relatives and friends. Any ceremony or cultural act that was not directly linked to Christian beliefs was made illegal during the times of my elders. The bible was translated into Cree syllabics in an effort to convert more Cree People into Christianity. My own relations went through residential schools and lived through experiences they now refuse to share. The institutional efforts put into the cultural and literal genocide of Indigenous Peoples in so-called Canada’s legacy lives on. Their lives are a testament to the resiliency that is carried by all Indigenous Peoples.

My existence and my music is my resistance. I honour my life and the lives of my gookums and joomshooms by honouring myself. I honour myself by choosing music and prioritizing my own healing. The two come hand in hand.

“What you heal within yourself, you heal for your whole family line.” – Mary Shields

I was born in 2000 and today I am 20 years old. I left my reserve at 16 to go to college. I flunked out of college at 18 and decided to live with my Father. These years in my life really were what lead me down the path of needing to understand my own history. Not just of my own Nation’s, but Indigenous History in Canada, as well. I started working at an Arts Concentration Program in the new year of 2019, one that I had graduated from when I was in high school. I’ve been working there for nearly 2 years, I work in my favourite city: Montreal! I pay my own bills and pay taxes (YES I PAY FUCKING TAXES). I live with my long time friend/sister and her Cornish Rex. I also live with my dog Scruffy who, like me, has spent most of his life in Mistissini! Now, we’re both just a couple of mixed kids from the Rez trying to make it in the city.

I work best under pressure and in collaboration with others, For example, I began writing lyrics to my latest project For Those I Love(d) 5 years ago. However, the project and it’s songs weren’t completed until the aid of my producers/friends Joey Langlois and Milan Andre. In all of the co-writing sessions with either of them, the feeling of pressure to write was palpable. But the results proved stronger!

For Those I Love(d) was written to honour the people that have been/are in my life that has afforded me love at one time or another.

Currently, my efforts are in putting content out around my latest E.P. No upcoming live shows… Since, you know…. COVID. For anyone who hasn’t seen me perform live, I basically nearly self induce a panic attack just before going up on stage and ride that adrenaline high till I get off. Though, I like to think I’ve got a good stage presence.

I have to give more than one answer. To get a “taste” of Angel, I would recommend listening to Need because I wrote the song about needing to be a better person for myself and having to make decisions for my own wellbeing. Wish We Were Older too because I’m putting out a bomb AF music video for it soon. To see my Rez, my home, my Mom, and my friends, I suggest watching the music video for my song Love is up the River.

Share this:
Related ItemsAngel BaribeauEric Alper PRFor Those I Love(d)InterviewLove Is Up The River
← Previous Story Five Questions With Imogen Joy
Next Story → Interview – Olivia Penalva