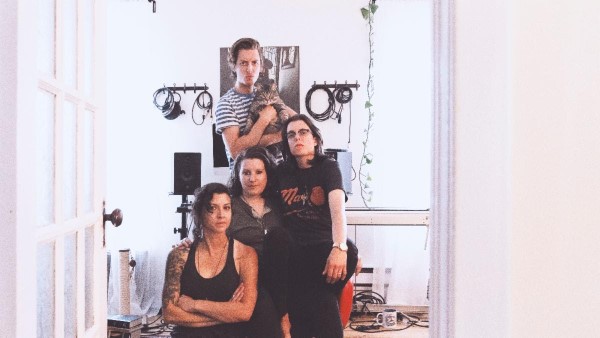 Following the announcement of their upcoming album Dead Broke, Like a Motorcycle, shared one last taste of what’s to come with the song “Sick Children.”

Clocking in at just under three minutes, this blistering track opens with a cacophony of crashing piano that leads into this sonically heavy track which takes a look at needless suffering – especially among the innocent – and asks “Who’s the keeper of these children.”

About the track, guitarist, and lyricist KT Lamond shares the inspiration behind the track saying,

“”Sick Children” is an open letter to whatever sadistic deity would create and preside over a world with so much senseless suffering. The English actor and writer Stephen Fry sums it up better than us: “Bone Cancer in Children? What’s that about? How dare you create a world where there is such misery that is not our fault? It’s utterly evil.”.

Since their 2016 debut High Hopes, they’ve been tested by just about every obstacle imaginable: navigating substance abuse, internal romantic break-ups, health issues, and a former record label that nearly tanked them, while having nothing to their name except the band that’s kept them together.

Overcoming this all, the band sacrificed a lot to get Dead Broke made – they even sold their long-time van (and 5th member), Herb. Packing up their things in Halifax – the band traveled across the country to Vancouver to work alongside veteran producer Howard Redekopp (Tegan and Sara, Mother Mother). The 13 track album dives into more egregious aspects of being a rock band, and humans at large – witnessing your idols abuse their positions of power, financial uncertainty, struggling with mental health/trauma, familial separation, and heartbreak… all while being dead broke.

Like A Motorcycle have been through the wringer but you can still hear them laughing from the next room over.  Not here to take themselves too seriously, these four endlessly entertain themselves and everyone around them with their antics both onstage and online.

“They’re clever but not glib, scrappy but not hardened and seem to know how to confront crimes of the heart without yielding to them,” perfectly summed up by writer Alison Lang (Music Writer/Herizons Magazine).