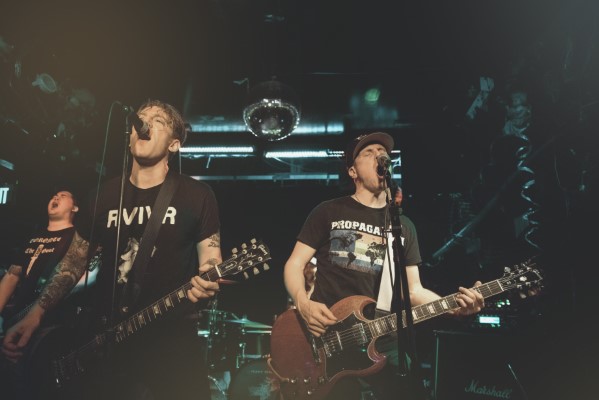 Toronto, ON-based melodic punk quartet Tragic Hearts have released their new EP, Daylight. The album was recorded at Karma Studios in Toronto, ON, produced, engineered, and mixed by Jesse Colburn and Mark Kasaboski, and mastered by Dan Weston.

“….Daylight is the second installment of a two-part concept record that finds the band exploring the dissolution of a relationship through the perspective of a cynical central figure, struggling to keep themselves above rock bottom. While the first EP traces a variety of experiences on the journey, in the end the principal character finds himself numb and nihilistic. The second EP flips things around, and eventually the lead finds himself redeemed from the past. Each song offers a little stop along that passage, for better or worse….”

Check out Daylight below, and find out more about Tragic Hearts via our Five Questions With segment.

Hello!  I’m Dean Richards and I sing and play guitar in Tragic Hearts.  We’re a punk band from Toronto with members who’ve been bouncing around in bands for the last couple of decades.  Some of our previous bands are The Artist Life, Closet Monster, and The Victim Party.

Our music I guess can be described as more “melodic punk” – we’re suckers for catchy harmonies and we tend to write stuff that fits the “pop structure” of a song.  Not all the time, but mostly.  I typically write my lyrics first and then pick up a guitar and rework the words and melodies to fit whatever key or chords I find sound the best.  That’s how most of the songs on the new EP happened.  But there are a few of them that we wrote all together, and those are some of the faster songs which I think turned out really cool.

We don’t have any upcoming shows right now in lieu of the pandemic.  But when we released the new EP last week I did a living room show on Instagram live which was pretty fun.  We might do that again at some point.  Even pre-COVID we didn’t play a ton of shows, but I definitely miss getting together and jamming and playing live.  The old 2nd wave doesn’t bode well for that.

I would explain our live show as (hopefully) pretty entertaining!  You can expect some interesting political commentary from our guitar player Jesse in between songs.  You’ll never know what you’ll get from me, I might blow my voice out on the first song and then struggle to sing anything the rest of the set.  That’s usually what happens.  Hopefully, our guitars stay in tune.

I would suggest they check out “Freedom’s Not Dead” from our new EP!  We just released a lyric video for that on Youtube, or they can listen to it by adding our new EP “Daylight” to their streaming service, or by going to our Bandcamp and paying $5 for the EP!

Oh man!  So many awesome Canadian bands.  We all love The Flatliners – classic Canadian punk rock superheroes.  We’re all really digging the new Protest The Hero.  I think Comeback Kid is the best Canadian hardcore band.  I also like Megan Patrick who is a Canadian country singer, but I think she lives in Nashville now.  I could be here for hours!