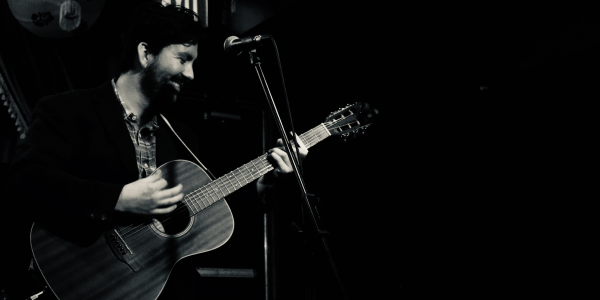 Toronto, ON-based singer-songwriter Alex Southey has released his new single, “On The Dance Floor” along with a video to accompany the release. The video is made up of sourced and filmed clips to reflect the tenderness of the song as a whole.

Check out the video for “On The Dance Floor” below and find out more about Alex via our Five Questions With segment.

Of course! I’m Alex Southey. I’m a singer-songwriter based in Toronto, and I am currently in the middle of promoting my second official LP. I’ve just released its lead single, “On the Dance Floor”, and it’s been getting a lot of positive interest! It’s a kind of tribute to Toronto dating life. Each verse references a different kind of example of a relationship. The first verse is about a one night stand with a past partner, the second verse is about a missed connection, and the third verse is about people settled into their relationship.

Sure! I like to change it up on each of my releases, and make sure they have a kind of cohesive sound. I find groups of songs sort of sit together like siblings almost, due to their similarity in theme, or atmosphere, or any other aspect of the song, and once you’ve got them all sort of assembled, then you can really begin to come up with arrangements, and the ingredients you want to play with. That’s sort of how I look at it. A lot of the arranging (string parts, harmonies etc.) happens at the time of recording. It’s a quick part of the process but arguably my favourite.

This time around, the main sound is still acoustic singer-songwriter-based, but with country instrumentation. I have fiddle (and “violin”) all over the album, in addition to lap steel guitar. This album is a distinctly different personality from the last or any of my prior releases.

As for my writing style, I only finish a song if it interests me. It’s a kind of foolproof way of knowing if a song is going out if it’s interested me all the way to its release. I consider that a good sign.

Unfortunately, I don’t! However, I Livestream regularly, so people following me on my social channels (Facebook, Twitter, Instagram) will be in the know. My live performances, as of right now, are very sparse – just me and my acoustic guitar. That may sound a little too dull even to fans of my music, but I really try and make it an engaging experience. In a live setting, I sing less in a hushed way than I do on the record. I engage with the audience. It’s meant to be a good experience. If you join, you’ll enjoy the music.

If I had to suggest someone listen to only one of my songs, I’d probably say it should be “On the Dance Floor”. This song represents a lot of elements on the upcoming record, and the elements it doesn’t will be present on the next single.

TL;DR – “On the Dance Floor”, which one can also watch because it has a great new timeless video.

>Canadian Beats is all about Canadian music, so who are your current favourite Canadian bands/artists?

Right now, my current favourite Canadian musicians are – in no particular order – Feist (whose Pleasure record deserves WAY more listenership), Westelaken, Zoon, Moscow Apartment, and a guy who I know from running my Music Hangout show at the Imperial Pub in Toronto, Jasper Payne.

Share this:
Related ItemsAlex SoutheyAuteur ResearchInterviewOn The Dance FloorontarioOntario MusicToronto ON
← Previous Story Five Questions With Peacefull
Next Story → Mike Robins has his first solo release with his single “Lightning Don’t Strike Twice” and it’s a great one