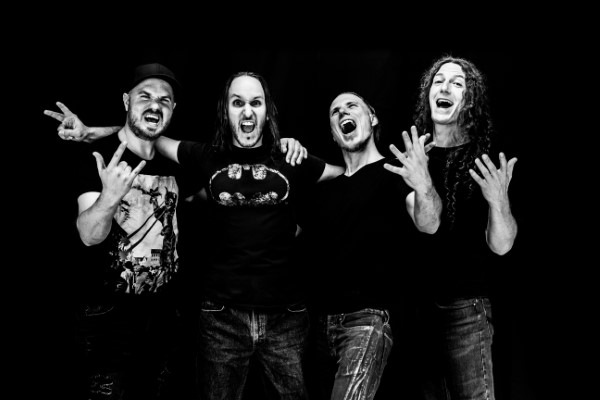 Montreal, QC-based 5-piece rock band, Peacefull released their debut album, Peacefull on June 1, 2020. They have released 2 official music videos from the release, and 4 songs in strong rotation on radio, including “Dreaming”, “The Shell”, “I Run” and “The Queen”.

Check out the video for “Dreaming” below and find out more about Peacefull via our Five Questions With segment.

Benoit *Ben The Race* Lacousière as a collaborator on lead guitar.

Founding father Gypsy met Carlos. Then Nick who was working with Gypsy at the time, joined the band. Franky, who was already friends with Gypsy and Carlos, came in for jam sessions as a percussionist. He later on officially joined the band as a guitar player. A couple of years later, Ben, who already knew Nick and Gypsy from a previous formation, joined in as a collaborator with his crazy solos.

Everybody is a songwriter in Peacefull. But initially, Guillaume came up with most of the songs on the album, and after the years, our jams as a band became many other songs. Then one day we had enough songs to make 2 full albums, so we decided it was more than the time for us to hit the Peacefull studio and go for it!

Nick and Frank did the recording, mixing, and mastering. But everyone in the band has contributed to the whole project, like accounting, website, graphics, promotions, etc.

We share the same peaceful values and philosophy in life, but in some ways, we have different tastes in music, therefore we think it does transcend in our music. From soft piano to metal guitars, you will find lots of different moods on the album.

We do not feel the need to relate to one style in particular. We don’t want to set any limits or barriers in our creations. Each song has its own story and feel. In the end, we think we are mostly between rock, folk, and heavy metal with a twist of punk; definitely not jazz or classical for now.

In those particular and uncertain times, we do not have any upcoming shows. Instead, we take advantage of the slowdown to get back into work, produce some great new stuff, and keep practicing for eventual events.

We want people to rock and have a good time while being transported away from their day to day routine.

That’s not an easy one!

Like we said before, every song has its own precise story and feel and it’s not everybody that feels the same at the same moment. From soft piano to heavy guitars, we have a wide range of styles on the album. One thing for sure is that you have to listen to the full album; there is at least one for you on there.

One thing for sure is that *The wolf Of Shambhala* is a very special song for us. We wrote it for our friend Mike who was with us at the beginning of our adventure. He took a little vacation in British Columbia and passed away over there. This song is dedicated to the loving memories of our brother.

That’s another hard question to answer. There are so many good artists we look upon.

Let’s take a classic with a new one for each of us:

For Nick: Brian Adams & Walk of the earth

For Carlos: Our lady peace & Half Moon Run

But this is just the tip of the iceberg; if you look at our Facebook page, we often post bands we like to honor their music! That gives you another reason to visit us! Come and say hello my friends!