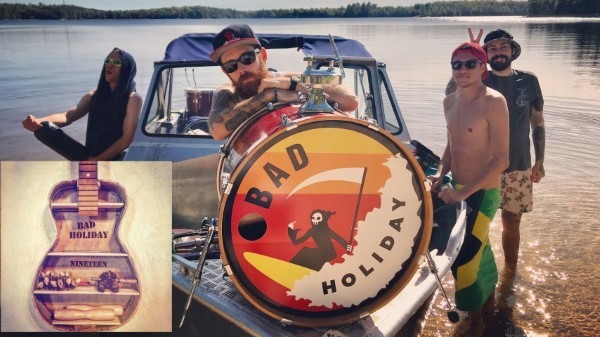 Are you in the mood for something unique and nostalgic to play on repeat? Well, then these punk party rockers from Toronto, Ontario have got a brand new album for you! You’ve seen them here on Canadian Beats before and I’m glad to have Bad Holiday back again with the release of their debut album, NINETEEN, featuring many incredible songs that you’ve come to expect from this talented group of friends.

Their debut album NINETEEN is available now and features the following singles that you may have already heard. Songs like “Can’t Control”, “Shoulda Never Gone”, “19” and a whole host of other high energy party tracks. The bulk of the album was recorded in a converted Church in Elizabethville, Ontario, which is what provided the amazing acoustics you can hear throughout the album. All the vocal and drum tracks took full advantage of the massive acoustic space that the church provided and you can hear every inch of that room on NINETEEN.

A lot of this album was written by lead singer Edward Kennington, produced and engineered to perfection by their drummer Ryan Schurman. Along with earth-shattering Bass and unbelievable Guitar riffs from Curtis Crook and Johnny Keith. The album NINETEEN is ready to rock you!!

Two personal favorites off of the album have to be their latest single “Shoulda Never Gone”, which features the band rocking and rollin’ in their stylish van. I at one point featured this video on Zach’s picks of the week on the Weekly Beat Down. The song tells a fiction story of a couple that is trying to stay together. Trying to work through there issues but ultimately “He” (The Narrator) splits and faces the consequences of his actions. Check out the video right here for “Shoulda Never Gone”.

My second favorite track off the album is the title track “19”, an absolute summertime jam! Even though we’re already into the fall it sure makes you feel like you’re sitting in the sun. Having a couple of beers with the boys or girls, just straight-up chilling and enjoying life. Check out and enjoy the video for “19” right here.

A terrific album from this very talented group of guys. With four singles to lead the way, Bad Holiday has been promoting and pushing this album for the all of 2020 and are ecstatic to unleash the full album upon you today. Please head on over to all their socials and give them a follow or like. Also, don’t forget to check out their debut album NINETEEN now. Trust me, I’m an expert and you won’t regret it!