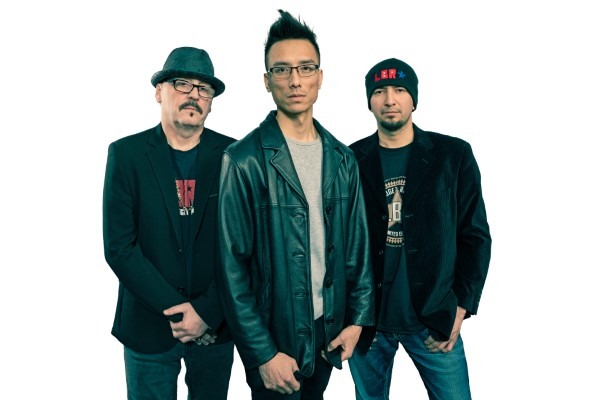 A small but mighty three-member group with a big purpose — to save rock & roll — multi-talented artists Kennie Henderson, Harley Whitehead, and Richie Cudmore’s bold brand of arena rock styles are the result of three music careers destined to land together.

“I’ve done it all,” Henderson shares, adding, “I’ve been playing music since I was young, but I always had something in the way: I worked various 9-5 jobs, I went to school to attain my Bachelor of Arts degree…

“Ultimately, it wasn’t good for me. The spirit of music relentlessly kept me awake at night and created an unhappiness that crept up on me every day.

“In the summer of 2017, I was out with some of my old bandmates when I bumped into Richie, who was out with his old bandmates; coincidence? I told him we were heading out on tour in BC and he said, ‘Oh, cool! If you ever need a drummer, let me know!’”

“With the song ‘Low Budget Rock Star,’ we want to portray our humble — yet cheeky — attitude influenced  from years of living and breathing this rock & rock philosophy and life,” Henderson shares. “We’re three guys and the only thing in our pockets is our songs and our stories; true, gritty, silly, intimate, and flavourful with the ability to put you through a lifetime of emotions.”

Check out “Low Budget Rock Star” below and find out more about the band via our Five Questions With segment.

Hey there Canadian Beats Fans! It’s Kennie, Harley, and Richie from the band, Low Budget Rock Star. Shout out to all you music lovers. Just wanted to let you know our self-titled debut single and lyric video is out there! Thanks for letting us into your headspace and allowing us to share life’s stories with you. We’ve been working hard in the studio to give you something special. The time is right and the collection of songs we have are our very best. The triangle is the strongest structure and when the three of us get together to play live, something magical happens. With each performance being a unique, spiritual, emotional experience.

When we sit down together to write we have open minds. The songs are our babies. We nurture them, allow them to grow, and when they are ready, they become their own. Speaking for themselves, telling our life’s story. Sometimes it starts with a guitar riff, a melody, or a catchy lyrical hook. From there, the seed is planted. With a give and take attitude and an overflowing well of ideas. We focus on a premise and continue from there. The inspiration comes from the people and world around us.

As far as upcoming shows, we are honoured to be participating in a multi-band celebration and tribute to our dear friend, mentor, and fellow musician, AJ Halcrow. This will be happening Saturday, October 3, 2020. We will be going live on our Facebook page so please catch our show. After an emotional performance at the Sakihiwe Festival, we are gearing up for more virtual performances with dates to be announced. The fans are very important to us. We respect that they take the time to follow and support us on our journey. Being a part of the musical fabric of their lives is a true honour! When you come to our live show or catch a virtual performance, we will give you our best. Our set is designed to take you through a lifetime of emotions. It will bring you up, it will bring you down, and a spiritual bond is born.

The obvious answer is our self-titled debut single… Low Budget Rock Star. We released it first because it is truly who we are. It was the first song we wrote together. It solidified our musical friendship. This is our take of life on the road. An anthem for anyone who has ever dreamed of being a rock star!

Kennie’s response, ” Having the opportunity to open for Mariana’s Trench, I became a lifelong fan”. “The Tragically Hip, for their impact on Canadian music and Gord Downie’s activism and passion for Indigenous peoples”. Richie’s response, “One of my all-time favourite bands is Rush. Of course, being a drummer I am a super fan of Neal Peart. Not just for his drumming expertise but especially for his eloquent lyrical content. Many people do not realize he wrote the lyrics for Rush. Through his vivid, colourful descriptions, and vibrant music behind it, Rush allowed my mind to be free”. “I am also a huge fan of The Tragically Hip for their organic live performances and bringing Canadiana to the forefront.  It truly is an amazing task to learn something about your country and to be entertained at the same time. “Having had serious health issues myself, the respect I have for Gord Downie is immeasurable. He persevered to deliver a final tour for the fans. A true rock god!”. Harley, “bands like Three Days Grace, Our Lady Peace, and the likes of Avril Lavigne for their gritty take on the demons of life”.