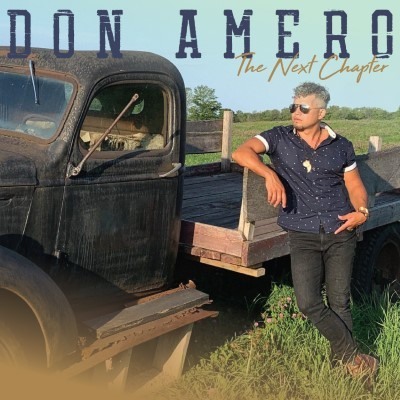 For over a decade, three-time JUNO Award nominee and MCMA award-winning artist Don Amero has been out there honing his craft and making waves across Canada as an engaging storyteller, singer-songwriter, and performer. Then, in September 2020, Amero gave his fans a lot to smile about.

September has had Amero, an MDM Recordings Inc. artist, who is of Cree and Metis heritage and has been recognized for his work as an amplifier of Indigenous thought and ideas, release his latest album The Next Chapter everywhere. He had an online exclusive with ETCanada.com prior to the CCMA Awards show. Then, he took part in the SiriusXM Top of the Country competition on September 25. Finally, Amero debuted “On Down The Road” in a memorable performance during the September 27 CCMA Awards broadcast.

The Next Chapter marks a momentous turning point in Amero’s career. This seven-track album has Amero looking towards the future and re-examining the past all at the same time. It’s also his first full-length project since inking his deal with MDM Recordings Inc. Four tracks off this album (“Wouldn’t Be Home,” “Morning Coffee,” “Wasn’t The Dress” and “Music Lover”) have already been hits on Canadian country music radio. The Next Chapter is available everywhere via MDM Recordings Inc. / Universal Music Canada.

Says Amero about The Next Chapter,

“This album truly is ‘The Next Chapter’ for me. It is my first official label release, it’s fully country and it’s setting me on a brand new path in the world of music. Already this new music has opened up new doors to me and I am excited for you all to dive into this Next Chapter with me because I sure didn’t get here alone!”

SiriusXM, in partnership with the Canadian Country Music Association (CCMA) did a cross-country search for the “next name in country music” and Amero is currently one of eight semi-finalists in the third annual SiriusXM Top of the Country competition. On September 25, he performed “Wasn’t the Dress” as a semi-finalist and is vying for the grand prize of $25,000 and the opportunity to perform on some of Canada’s biggest country music stages, SOCAN songwriting camps, and once-in-a-lifetime mentorship opportunities from some of the industry’s best.

In a Canadian Beats exclusive on being in the Sirius XM Top Of The Country competition, Amero says:

“This is no small thing for me. The talent pool in this contest is so incredible and to be among them is a definite testament to how far I’ve come. I mean, I literally love every one of these artists and believe that anyone of us is good enough to win this thing. I look so very forward to the next few months and seeing what everyone brings to the table. In someway it really helps us all grow a lot because we’re seeing what everybody else is A game looks like and it pushes us to make sure that we bring ours.”

To watch his performance on SiriusXM Top of the Country competition, click here.

Finally, the icing on the cake for Amero was his first-time performance on the CMMA Awards stage (albeit, a different type of stage this year). He debuted his next single “On Down The Road” which is the last track from The Next Chapter. This was a performance showing us all the extraordinary talent that is Don Amero while creating a lasting impression for those who watched.

Amero, in an exclusive with Canadian Beats, had this to say about his on being on the CCMA Awards,

“You only get a first time one time at an awards show like this and I really didn’t want to squander that moment. I am so appreciative of how the CCMA organization has been supporting and believing in me for the last three years. The only thing that could’ve been better is if we were in an arena and playing for the country music fans, but this is as good as it gets right now and I’m still walking on cloud nine because of that experience.”

To watch Amero’s acoustic performance of “On Down The Road” during the CCMA Awards, click here.

Amero and his fans truly have had a September to remember! He is medicine for our souls.