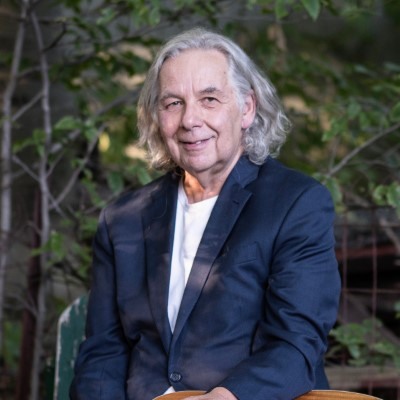 Toronto, ON-based contemporary folk-rocker Howard Gladstone has released his newest single, “Paradise, Passing Through”. The song is the first to arrive ahead of Gladstone’s forthcoming and sixth album, The Promise, set for release on October 9th, 2020.

“Paradise, Passing Through” was composed during a marvelous trip through Polynesia that offered time for musical reflections on history, art, beauty, inspiration, colonization, religion, commerce, even the transitory nature of our time in the world, Gladstone shares. The song has a dreamy, lush tonality that drifts between major and minor coupled with haunting imagery reinforced by Kevin Laliberte’s precise guitar work.

Check out the single below and find out more about Howard via our Five Questions With segment.

My name is Howard Gladstone, I was born and have lived in Toronto all my life.  I’m old enough to have seen the Beatles at Maple Leaf Gardens as a kid and young enough to stay active writing and performing my own original material.    I grew up in a chaotic, slightly dysfunctional musical household in North York where everybody played guitars, pianos, and sang. Our dad played and sang old-time tunes, accompanied himself on a rare Gibson 4-string tenor guitar, sang in a barbershop band, listened to Dixieland, early jazz, some classics, and Broadway shows.  So that’s the music I first heard, and then early rock and roll on transistor radios.  During the folk days, I played in the university pubs, while studying English at York University.  I was pursuing journalism and wrote many articles, mostly reviewing music. My interview with Robbie Robertson was reprinted in Rolling Stone magazine.  I was so influenced/overwhelmed by the great songwriters and musicians in the early days of folk and rock, that I was influenced not to write much.  For some years thereafter, I honed my writing craft, before finally feeling confident enough to release my first album of original songs “Sunflowers Light The Room” in 2001.  Since then I’ve released five albums in total, with the sixth album “The Promise” coming up soon.  I’ve been called a late bloomer, and that’s fine with me.   To balance things out, I have run an electronics company in the audio and musical industry.  I also co-founded and presented the Toronto City Roots Festival from 2004-10. In 2014, I had a life-changing experience: a spinal cord injury, resulting in emergency surgery, and a long slow recovery.  The experience taught me the importance of resilience, and not to give up hope.  During that period, my album of recovery, Hourglass, was born  In 2017, I co-founded a record label, Sonic Peach Music. In the current streaming world, where musicians receive pittances, and live performance is limited,  creating a record label is truly a labour of love.    My album “The Promise” and all the music on our label is released in both Standard resolution (CD quality) and High Resolution (HD) quality, for an enhanced musical experience.  My audiophile background insists on it.

As a songwriter, I never know where and how inspiration will strike.  But it is as much about hard work and craft as about inspiration. Here are some comments on songs from the new album “The Promise” that provide some insight into the range and diversity of subject matter and approach.

“Woodstock Fifty” was written in August 2019, pretty much on the exact anniversary of that historic cultural landmark, and contemplates memory, and keeping hopes and dreams alive – if possible.  Musically I guess it is reminiscent of the Byrds and Jesse Colin Young, not to mention Joni M.

“Birds of Spain” erupted immediately after returning from a 2019 trip to that special land.  It offers an emotional response to the fate of exiles and the oppressed.  Kevin Laliberte added a powerful flamenco guitar performance, which is exactly how I envisioned the song.

“Someday,” emerged during the early dark days of the pandemic, with the thought that we can, must, and will do better.  Keep hope alive.  It’s a litany of pledges and promises.

“The Promise” was written in early 2020 to celebrate the joyous occasion of new birth, and became the title song and central focus of the album.  How will we keep a promise to a new generation, when we as humans are destroying the gifts we are given?  “There’s a light keeps shining through. ”  I didn’t think of it at the time, but perhaps I was trying to write a song as beautiful as “Wonderful World” or “Somewhere Over the Rainbow”. Old-time stuff.

“Crossroads” is both desolate and hopeful, a hybrid protest song. It was written to help focus more attention on the climate crisis, and the opportunity it allows for a rebirth, led by a younger generation.  it’s a topical song, but one that is meant to last longer than a season – hopefully it could become an anthem.  Musically, Dire Straights and Pink Floyd came to mind.

As can be seen, I have a craftsman approach to lyric writing,  and often approach the subject matter as a seasoned journalist would: with an eye for detail, and a sense of story.   Other songs reflect a more lyrical and romantic side.  I often think of songs as a type of multi-faced musical prism and can be experienced differently depending on how the light strikes.   Musically, eclectic is me.

As far as my vocal style, it  has been variously called “silky, “a blues-inspired voice”, and  “a comfortable warm croon.” I’ve also been described as “a singing poet.”

As a singer-songwriter, I normally accompany myself on acoustic guitar.  My usual accompanists are Tony Quarrington (guitar, vocal harmony), and Laura Fernandez (background vocal, piano).  We focus on getting the harmonies right, and I focus on selling the song by finding the meaning and emotion in the lyric. In addition to my originals, we often feature songs by Tony and Laura – each stand-out writers and performers.  Bob Cohen might on occasion sub in on guitar, or play electric bass.

The song “Paradise, Passing Through” is the second track on the new album, The Promise.  It was composed in 2018 during a marvelous trip through Polynesia that offered time for reflecting on history (human and natural), art, beauty, inspiration, colonization, religion, commerce, even the transitory nature of our time in the world.  It’s a lush lilting waltz, and directly references  Gaugin’s magical sojourn in the South Seas.  It has a dreamy tonality that drifts between major and minor keys, and some very haunting imagery.  Ocean-like guitar swells (by Kevin Laliberte),  and ethereal background vocals (Laura Fernandez, Julie Gladstone), complete the spell.

We made a music video for this tune.  The Japanese videographer Tomo Nogi has created a very evocative, sensual video that is available on Youtube, or my website.

I’ll admit my bias, but I’m very partial to the other artists on the Sonic Peach Music label.  Laura Fernandez’ new album “Okay, Alright”, in my opinion, is destined to become a classic album. It combines jazz, pop, and classical musical elements, with a unique and honest confessional vocal style, great musicianship,  and powerful and emotional lyrics.   Tony Quarrington and Zoey Adams are the duo Q&A and are releasing three EPs on the Sonic Peach label this fall, highlighting their diverse songwriting and performing styles  – jazz, pop, and folk.  Great tunes, production, and performance. Jon Brooks, whose song “There Is Only Love” I cover on my new album, is a vital and important songwriter.   On my new album, I had the pleasure to work with Kevin Laliberte, a guitarist who can play brilliantly in a variety of styles, including flamenco and world.  Kevin is a founding member of “Sultans of String” whose great new album “Refuge” deserves more attention; he also plays with Amanda Martinez, and I am a fan of her new album.   I’m also a fan of Marito Marques, a fantastic drummer from Coimbra, Portugal, now resident in Canada who has some interesting original material;  he plays on my album “The Promise” and shines throughout, particularly the off-kilter waltz “It All Falls Down” where his odd percussion songs are featured. Russ Boswell plays bass with everybody.  I can name a dozen or more below-the-radar singer/songwriters in town who deserve more recognition…. it is a strong musical community in Toronto, and all across this country in fact.