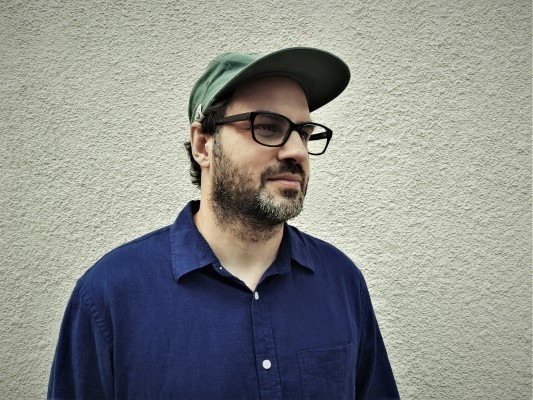 Montreal, QC-born singer-songwriter, and multi-instrumentalist Dan Desjardins, otherwise known as Cosmos Island released his debut EP, Someplace on September 25, 2020. Someplace is an indie-rock EP that carries notable tinges of 60s pop, influences that Dan apportions perfectly. The six tracks that make up the EP give us all the more reason to settle comfortably into the universe of Cosmos Island.

Check out the EP below and find out more about Cosmos Island via our Five Questions With segment.

Hi everyone, thank you for having me on the blog. My name is Dan Desjardins, I am a composer/songwriter born and raised in Montreal. I have been playing music for over 20 years now and Cosmos Island is my latest project for which I composed, wrote, played, and recorded the songs on the Someplace EP album.

In the past, I have contributed to different musical projects such as 2e Monde, a french hip hop band from Montreal. In 2010, with some of my childhood friends, I formed a band named V for Escargot in which I was the lead guitarist and composer/singer on a few songs. During that time I’ve gained a lot of experience with arrangments and live performances. After 5 years, I decided to quit the band and concentrate on my family and my own musical project. I created Iris Shot with one of my friend, Julien Jaffre, and we made an EP album in 2017. I learned a lot about recording and song structure during the sessions we had. In 2018 with the help of my uncles, we built a little studio in my basement which I call ”The Green Studio” because you know, the

I am strongly influenced by pop music from the ’60s and post-punk/synth-pop from the late ’70s and early ’80s. So I always try to make something that mixes all that with my own style. I guess the best words to describe my style would be ”dreamy basement wave”. Usually, it begins with a melody I have in my head and I try to put some chords over it. Then if I am feeling something while I’m playing it, I put it on my list for potential songs. I test a lot of different arrangments during the recording process and different ways to approach the song. Sometimes I can work several weeks on a song and then realize that it doesn’t come out very well. So I redo the whole thing. Fortunately, it doesn’t happen a lot. I go song by song, I don’t like to work on more than one song at a time. I write the lyrics at the very end while I record the vocals. Even if I have the melody since the beginning, but I usually have an idea of what the lyrics will be about.

Unfortunately, I don’t have any upcoming shows and I don’t have any planned because of the current situation. Also, because I was not able to gather other musicians to play the songs live. We will see what the future has for us in the next months. It’s been a long time since I played live and I miss it. Right now I’m working on a second EP that I hope I will be able to release next year.

I suppose my first single ”Winston meets Julia” would be the one. It’s catchy, it has a good vibe and the lyrics are inspired by a passage in one of the best books ever written, ”1984” by George Orwell.

Preoccupations is a great formation and have a big influence on my musical creativity. Mike Wallace, the drummer, is incredible. There’s a lot of really good Canadian artists out there such as Mac DeMarco, Patrick Watson, Born Ruffians.

Back in the days, I use to listen to Islands a lot. The album ”Arm’s way” is a classic for me. Years ago, I discovered that old 70’s prog-rock band from Toronto, Klaatu. The song ” Calling occupants of interplanetary craft ” is honestly on my top 10 best songs of all time.