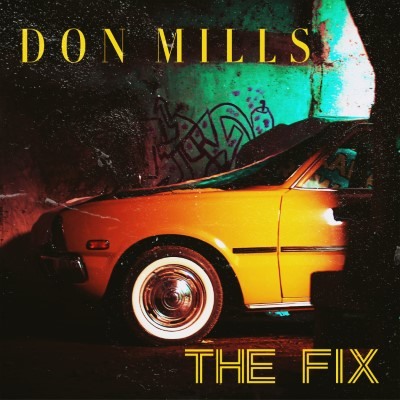 Don Mills (aka Miloš Angelov) was born in Belgrade, Serbia, and moved to Toronto as a teenager. As a rock drummer in a high school band, he transitioned to bass guitar which led to his career as a bassist. Early in his bass career, he’s played with local R&B/soul artists Ray Robinson, Divine Brown, Philosopher Kings, Zaki Ibrahim, Fito Blanko, Keshia Chante, Danny Fernandes, JRDN. He joined Matthew Good in 2007 and was an active studio and touring bass player for 10 years. During that time, he learned about music production and started writing and developing his own sound.

Check out “The Fix” below and find out more about Don Mills via our Five Questions With segment.

My name is Don Mills, an indie-funk-alt-R&B artist, and producer from Toronto. I’ve started releasing songs with features in 2019 on my own label “Politik Records” and recently tapped into the singer/songwriter aspect and that can be heard on “THE FIX”. And lemme tell you – I like it, I like it a lot…

My music is always an eclectic style. It ranges from funkier things, sometimes it hints dancehall and kind of vintage rockish sounds. I’d say I’m most influenced by black music and British rock, especially in the way I write – even if it’s a R&B/pop/rap genre. It’s just there as a part of my style and it makes me a bit different in sessions. I grew up in a household of musicians and thanks to my dad I’ve listened to a lot of Stevie Wonder, Crusaders, Deep Purple, Bob Marley, XTC, Whitesnake, Bill Withers – all kinds of things.

Unfortunately not, but I’m hoping when we get back to that stage I can put a band of my Toronto homies together and we can get out there. I’m still not willing to play to a phone camera not knowing what the feedback is on the other side. Is that egotistical? I dunno, I don’t care… but ya – I can’t wait to play for real people!

Definitely “THE FIX” I feel it’s the closest to the kind of sound I had for this upcoming EP and you know your man is kinda nice on it….