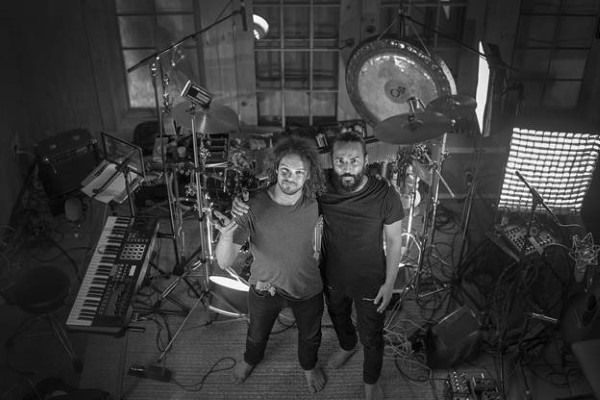 Initially from their 2019 sophomore release Eclipse, the momentary retrospective is a cause for pause for the Canadian pairing, serving as foreshadowing to their forthcoming release later this year.

ince its earliest inception, the outfit has been comprised of Hubert Gonthier-Blouin and Julien Watine; the duo intertwined talents to create their 2017 release, Hiraeth, 2019 follow-up, Eclipse, and solidifying their performance chops and critical acclaim along the way.

“Eclipse — and ‘Stars’ — continues the journey that began with Hiraeth,” Gonthier-Blouin says of their debut album, and one that first introduces listeners to a contemplative passage through four varying landscapes. “One could see them as two sides of the same coins.”

“Similar ideas and emotions expressed from a different perspective,” Watine adds. “Like two views of a secret.”

With a sound firmly rooted in sonic fragility and soulful honesty, Gonthier-Blouin and Watine looked to expand, growing the duo into a quintet for Dawn — said upcoming album set for release this year.

“The recording for Dawn took place in a mansion in the Eastern Townships,” Watine explains. “The addition of Marie-Pierre Bellefeuille on keyboards and vocals, Marie-Pier Gagné on cello, and Christian Paré on percussion has brought the music of Silk to new, sonic heights.”

That sentiment includes revisiting and reimagining existing tracks in Silk’s repertoire; Dawn is also set to breathe new life into songs from Eclipse, they reveal.

“It’s an expansion in more ways than one,” Gonthier-Blouin considers. “This EP captures the feel and emotion of five souls communicating through the vessel of music.”

Check out “Stars” below and find out more about Silk via our Five Questions With segment.

Silk is a duo comprised of Hubert Gonthier-Blouin & Julien Watine. We met in Québec City some 10 odd years ago and the idea of the two of us making music together had been brewing since the year 2011. Things started coming together in 2014 and haven’t really stopped since. We’ve released 2 studio albums (Hiraeth in 2017 and Eclipse in 2019) and a 4 songs/videos Live EP (Dawn) in the first couple of months of 2020.

Our music is very dynamic. It ranges from Simon & Garfunkel-esque beauty and melodies to Meshuggah-esque heaviness. We find these contrasting dynamics emphasize the characteristics of their opposite. This wide palette of sounds and free-form exploration in songwriting is a key component of Silk. I do believe we’ve nailed that a few times on Eclipse. So there you go, beautiful and intricate.

The songs are written on guitar and we usually put tons of layers to create soundscapes of intricate beauty. Our records are an invitation to mysterious journeys. William Berger from the Metropolitan Opera in New York described us as:  “transcendentally diaphanous and distinctly heavy at the same time”.

Our first two records had very clear narratives. Having a story really helped knowing from the get go what the music needed to convey, where it needed to go. There’s a story in both Hiraeth and Eclipse and they overlap in some places but we’ve made sure the words were obscure enough for the listener to make them their own.

When we write, we always have a computer nearby and ready to roll. Our process is very methodical but also quite spontaneous. The idea is to get in that creative space and track ideas as they manifest. Once we get there, the music usually writes itself rather quickly. We live in different cities (Québec and Potton) and it actually helps us be more focused and efficient. Once our time is up, we go home, let these sketches brew, take notes and tweak them as needed on our next meeting.

Our approach changed slightly with Dawn, our latest Live video EP. This time around we added 3 extra musicians (along with the camera crew and soundman) and had very little time to get things up and running. The end result was, thankfully, quite positive. Indeed, the EP captures the feel and emotion of five souls communicating through the vessel of music and hints at a new direction for Silk.

We had a few performances scheduled for 2020 around the province but, everything got cancelled due to COVID-19. Despite the fact that our records are very layered, we’ve stripped the arrangements down to be able to perform as a duo. It was a gamble as we were unsure if the songs would stand without all the studio gimmicks, but in the end it worked great! The music speaks volumes through its sonic fragility and soulful honesty. We are in the process of incorporating more musicians to our live performances though. After recording our live EP, we really fell in love with the idea of adding more souls to the equation.

I’d have to go with the song “Stars”. It’s a great song to perform live and we both feel it gives a good idea of what Silk represents on an artistic and spiritual level.

We’re both massive fans of Devin Townsend from Vancouver. But I’ll also give a shout out to my friends from $keleton Club, Juicebox and Brain Flower, all terrific bands!