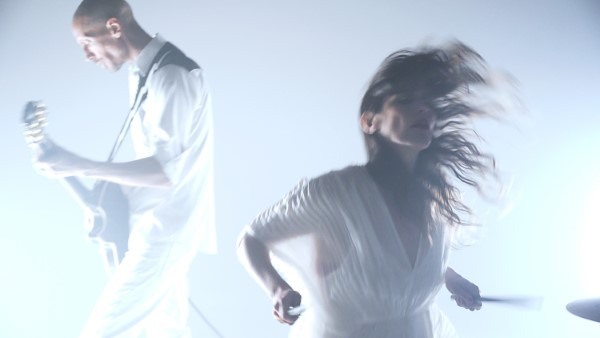 Toronto, ON-based garage punk duo, Queens & Kings have unveiled their video for their newest single, “I’m Beggin'”. The video, which was filmed in February with a small crew of friends at 276 Sterling Studio depicts the many nuances, the complexity, and the urgency of wanting the things you cannot have and how that is often why we want them. From light to dark, colourful to muted, the video visually depicts the rapid changeability and fickleness of the human heart and mind. The scenes shift from calm to chaotic until band drummer Alissa Klug emerges from her kit and submits to the chaos.

“We wanted to tell the story of the song through colour, using high key and low key footage to signify human extremes as well as solid and strobing lights to show the turmoil and unrest we can feel when trying to figure out what it is we truly want. Because often when we get closer to the things we thought we wanted, they start to lose their allure, or we can start to doubt if we are making the right decisions, or if we really wanted them to begin .”

Filmed by Julian Meli, the band’s guitarist Brendan Albert edited the video himself as the band exchanged ideas creatively back and forth between neighboring cities.

Check out the video below and find out a bit more about the band in our mini-interview.

First off, tell us about the writing process behind “I’m beggin'”
Our songs often come from just jamming and riffing off of each other.  One of us will start playing, the other will join in and we’ll just hit record on our phones. It’s really interesting to be able to look back on the early recordings and see how songs have evolved from working in this way.  I think we probably have about 100 or more unfinished songs on our phones from these jams, haha! This one started with Brendan just noodling the lead guitar riff and we just started vocalizing with each other until it took the shape that it ended up as being. I remember that we were later working on it at home and I got up to take a shower and the whole bridge just kind of fell out of the sky on me, haha. I think this one came together pretty quickly. It was just meant to be.
How did you decide that this song should be a single?
There was just some magical energy to this one and it’s just felt in the room when we play it live. It came together so quickly like it was just waiting to be written.  We truly believe in all of our songs. There will be no “filler” type tracks on the album this will be on, but this is one of the ones that just give us that extra kick of adrenaline…
Tell us about the video making process.
Brendan had an idea to do something that was built on kind of negative and positive, black vs. white, responding to the beat of the music.  We even rented two drum kits, one white, one black for this effect.  But we knew we also wanted to incorporate some colour and for me, it brought The Wizard of Oz to mind, how it starts off in black and white and then goes to colour scenes when she’s over the rainbow as if it’s a new and more alive reality or a really vivid dream state.  We had this concept in mind when making the video.  How we can break out of the mundane and strive for something more.  Our friend Julian Meli shot the video and Brendan did all of the editing.  I would also go through the footage and pick parts and clips that were strong for different parts or lines and sent him some effects I’d find on the internet and other things we could incorporate, he did the same, and then he spent many many hours crafting it together.
What’s next for you?
We are currently mastering one of our other favorite upcoming tracks called Earthquake.  We actually shot most of the video for it over the weekend and it’s pretty insane!  We’ll be releasing more music over the upcoming months leading to our debut album for this project.