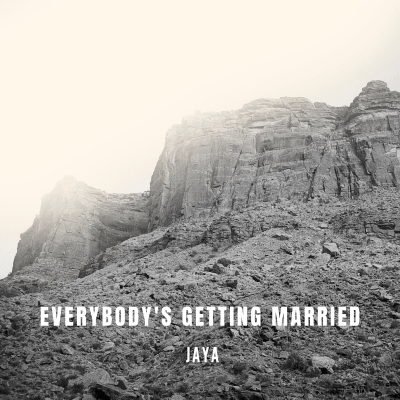 Everybody’s Getting Married is the first solo EP from Victoria-based artist, JAYA.

Overall, Everybody’s Getting Married is like a sepia-toned photo of an old friend: dreamy, intimate, optimistic, yet melancholic, with strong qualities of nostalgia. Usually paired with her band Wise Child, this is JAYA’s first attempt at a solo project and, as she says, “stepping away from my bandmates to discover what I sound like and what I am capable of on my own.”

To that end, JAYA is the sole songwriter on this project, which is probably what gives the EP its personal, intimate feel. JAYA’s press says that she has been singing since before she had front teeth. This shows in her voice which has a light, unhurried, naturalistic quality to it — as if singing maybe even more natural to JAYA than breathing. The EP builds its dreamy, drifting soundscapes primarily with the use of a swaying guitar, laid-back keyboard, and an airy chorus to support JAYA’s vocals. The tracks amble along with easygoing measures to invite the listener to listen to JAYA’s lyrics about love, regret, moving forward, taking risks.

A standout track on the EP for me was “Not Gonna Happen”. “Not Gonna Happen” as the title suggests, is a melancholic downbeat track about not waiting for something that won’t occur. As the lyrics assert “Life’s a bitch/Time’s a bit too slow to really do anything of importance.” The track undercuts it’s dark message and tone, though, with a cheeky keyboard refrain that has almost a video game feel to it. The track then shifts in its last few moments from its dower tone to resolve to build a house with their partner “and call it a day” — implying that even if life is a bitch, at least JAYA can give up on it with someone she cares about.